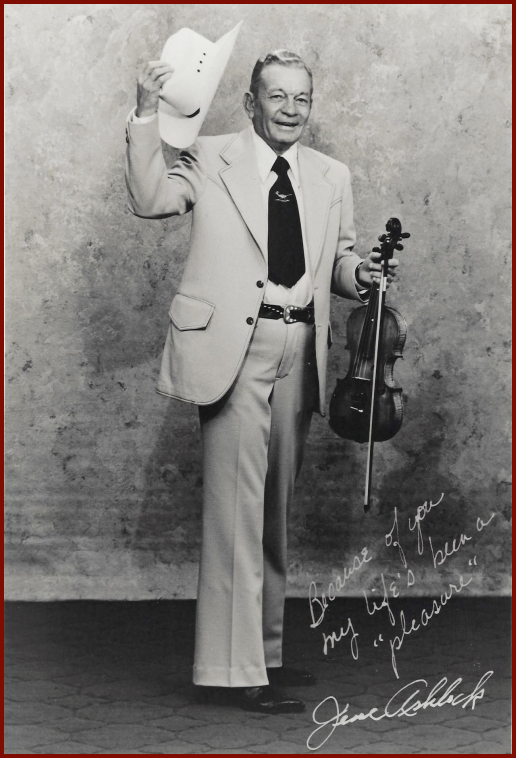 Jesse Thedford Ashlock (1915-1976), the Texas Jazz Fiddle King, was born on February 22, 1915 in Walker County Texas. He was the youngest of nine children and his ancestry traces back to some of the earliest mid 1800s settlers to the Republic of Texas. Jesse loved music and started playing violin at the age of nine. He was taught to play the fiddle at home by his eldest brother, James Oliver (Jim). The extended Ashlock family lived mostly in Tarrant, Denton and Collin counties of north Texas. 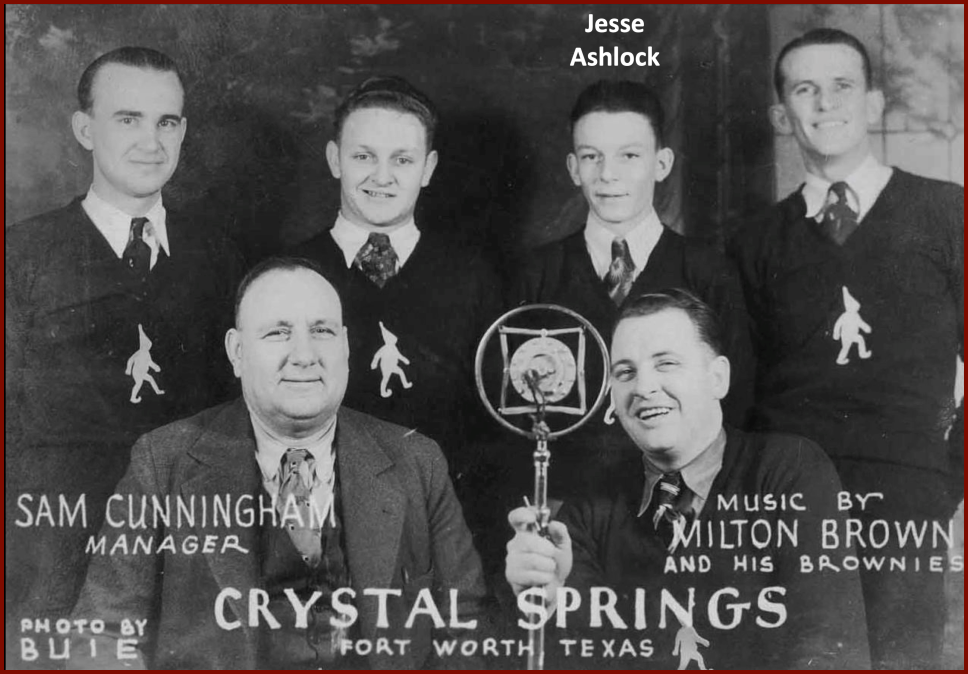 As a young teenager in 1930, Jesse would sneak into the famed Crystal Springs Dance Hall on White Settlement Road just west of downtown Fort Worth to listen to and learn from the greatest fiddler he'd ever seen - Bob Wills, who along with Milton Brown, Herman Arnspiger, Derwood Brown and Sleepy Johnson, had just started the red-hot Light Crust Doughboys. The Doughboys were packing the dance floor every Friday and Saturday night, and on some of those nights, the talented young Jesse was thrilled to be invited up on stage to play with the band. Both Wills and Brown were a huge influence on Jesse.

Wills soon bought Jesse a new fiddle and taught him to play breakdown dance fiddle licks, while the teenager continued to perfect his improvised Jazz fiddle skill. In 1932 Brown and his little brother Derwood split from the Doughboys to start Milton Brown & his Musical Brownies, and Jesse was invited to join the new band. Brown paired him with the great classical violinist Cecil Brower to create the first ever harmonizing twin fiddles in a hot string band. Brown established many other innovations such as jazz piano and the revolutionary introduction of the world's first amplified guitar with pioneering steel guitarist Bob Dunn. The Musical Brownies were hugely successful throughout the entire Southwest up until Brown's tragic death in 1936. Milton Brown was later recognized as the "Father of Western Swing" thanks to his pioneering efforts of blending Cowboy Fiddle with City Swing Jazz and Blues. 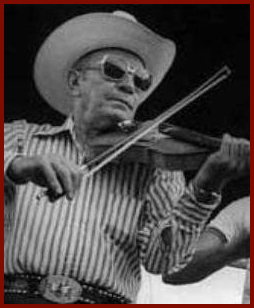 In 1935 Jesse left the Brownies to join the King of Western Swing, Bob Wills & his Texas Playboys. Wills had left the Doughboys in 1933 and moved to Waco and eventually Tulsa in 1934. The Texas Playboys began playing on Tulsa's powerful 50,000 watt KVOO Radio and also played huge weekly dances at Cain's Ballroom, along with many other dance halls throughout Oklahoma and Texas. Jesse and the Texas Playboys picked up where the Musical Brownies had ended, and dramatically grew Western Swing to national stardom from Hollywood to Nashville. While playing for Wills during those glory years, he became an integral part of the band. He was known as a practical joker. He once told Wills during a live ballroom performance that Bob's pants were unzipped, causing him to immediately stop playing his chorus, doubling over trying to cover up the offending opening of his trousers, and later learning it was one of Jesse's hilarious pranks. During his career with Wills, Jesse was also involved with some of the Hollywood Western movies that Wills and the Texas Playboys made. 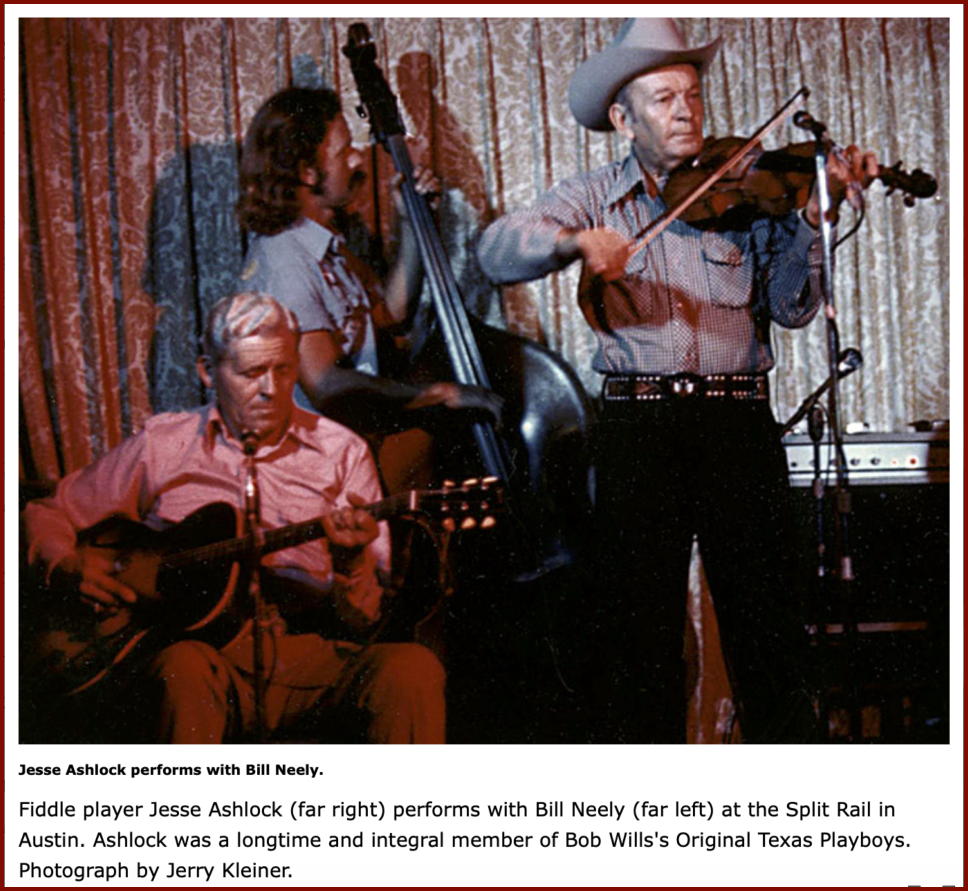 Jesse's playing style had its roots in jazz. His fiddle style was characterized by hot breaks and hot choruses. His idol was the heralded jazz violinist Joe Venuti. Jesse's amazing ability to play the fiddle like a horn and sometimes even like a crying woman earned him placement in the category of the very best "hot fiddlers." Jesse played off and on with the Texas Playboys throughout most of his career, with a memorable final performance at a Texas Playboys reunion show at Austin's Broken Spoke Dance Hall just three days before his death. He had suffered from cancer and died at the age of 61 on February 9, 1976, just a year after moving to Austin from Claremore, Oklahoma. In 1990 Jesse was posthumously inducted into the Western Swing Society Hall of Fame, and was also inducted into the Texas Western Swing Hall of Fame in 1991. 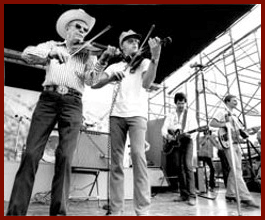 Andrea Ashlock Jones, Jesse's niece, recalls one of her earliest memories of her uncle, "Uncle Jesse was playing with Bob Wills & his Texas Playboys at the Casino Beach Ballroom just northwest of Fort Worth near Lake Worth. My parents took me and we stood in the back of the huge dance hall. Daddy held me up so I could see Uncle Jesse play his fiddle to the delight of more than 2,000 dancing fans." Other sweet memories she had included the visits from her uncle, "Uncle Jesse would come to my parents' home and play hymns on his fiddle for my maternal grandmother. Everyone loved Jesse. He was a prankster with a wonderful sense of humor. His musical talent was so great that he was known as the best jazz fiddler in the entire State of Texas during his lifetime."

At his funeral, the Original Texas Playboys served as pall bearers, and the newly formed Western Swing band, Asleep At The Wheel, played some of Jesse's highly successful songs that he had written, without credit, for the Texas Playboys. They also played Jesse's favorite hymn, "When They Ring Those Golden Bells" and Willie Nelson's family sent a wonderful spray of flowers in the shape of a fiddle for Jesse Ashlock - The Texas Jazz Fiddle King.