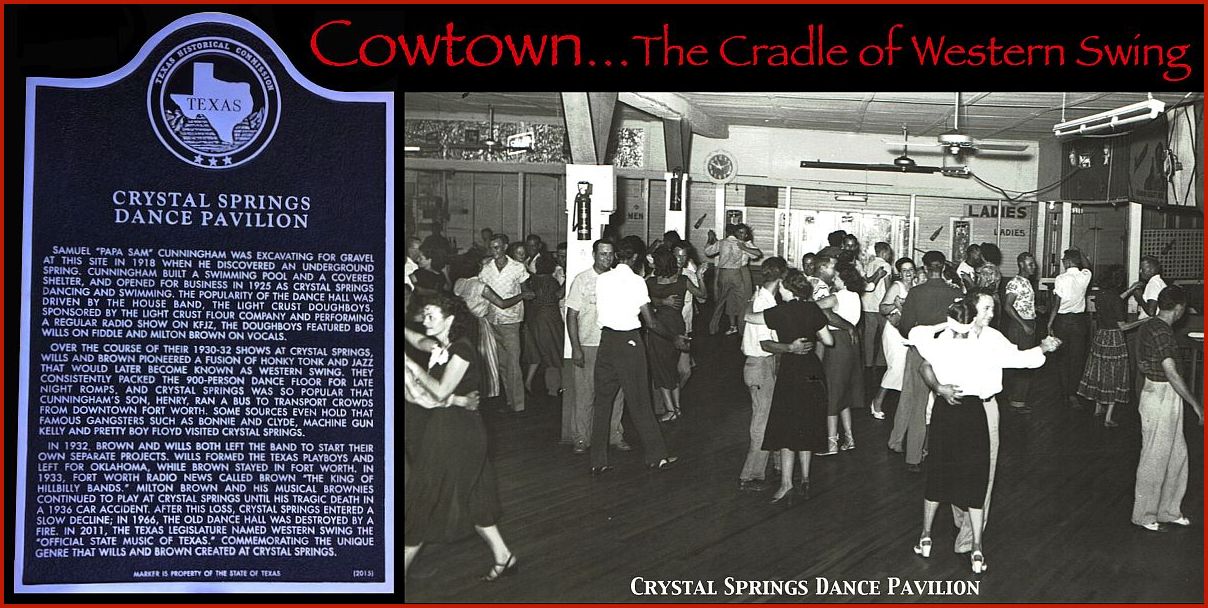 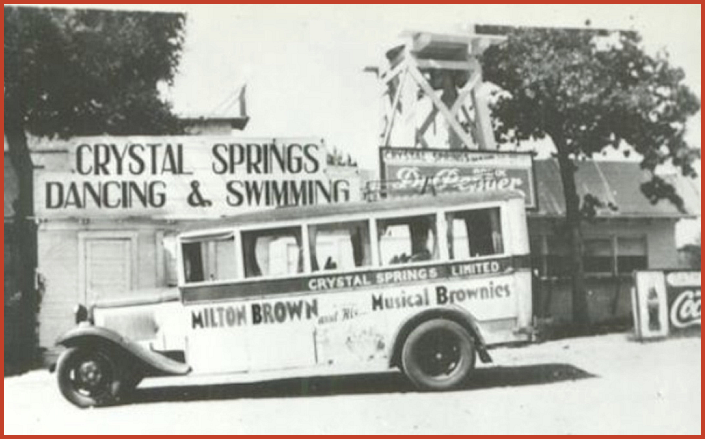 Fort Worth "Cowtown" Texas has a live music legacy that stretches back 90 years, built on legendary dance venues, a wealth of iconic Western Swing and Texas Honky Tonk musicians and singers, and knowledgeable and enthusiastic fans who have never been fooled by pretenders. 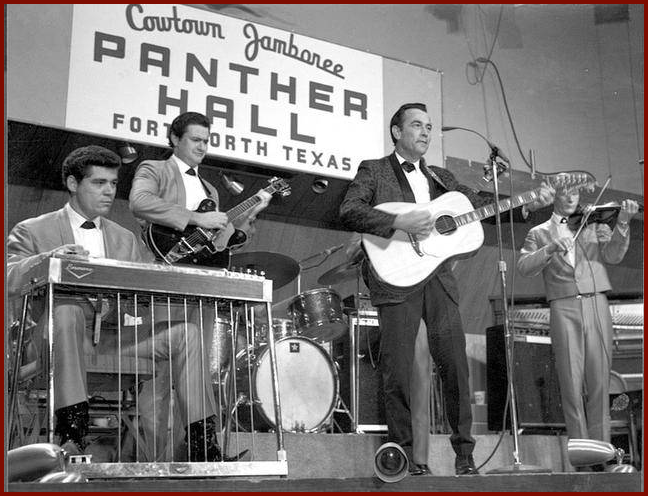 "Fort Worth's country music reputation was cemented by its enthusiastic support of live dance music", said Casey Monahan, former director of the Texas Music Office in Austin. "The success of artists such as Bob Wills, Milton Brown and the Light Crust Doughboys made Cowtown a hub on the country music touring circuit. The long and illustrious reign of Panther Hall, the World's Largest Honky Tonk from 1963 to 1978, and its hosting of The Cowtown Jamboree, further made Western Swing King in Cowtown". 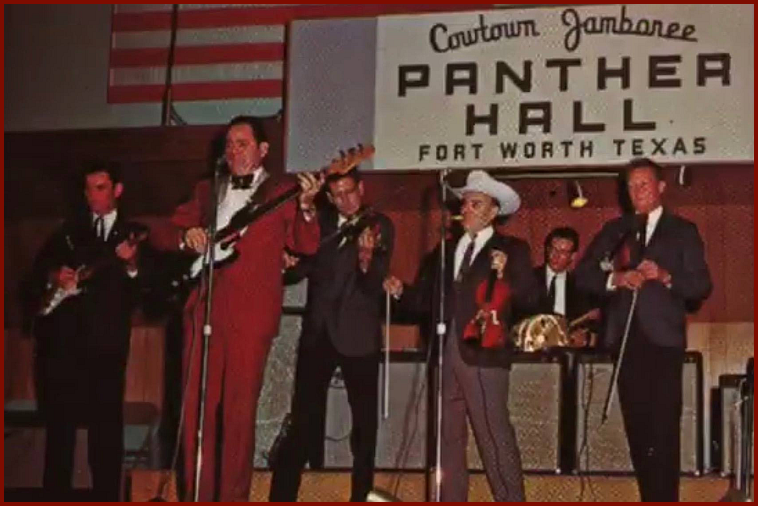 It all began with the music makers - fiddlers, singers and guitarists who established a pipeline of talent that continues today. "There was a study made in Nashville some time back of backup musicians on up to Grand Ole Opry stars, and an estimated 70 to 75 percent of those musicians got their start in Texas," said Bill Mack, the legendary radio personality best known as the "Midnight Cowboy" on WBAP/820 AM. Mack, 82, lives in east Fort Worth with his wife, Cindy.

"Most of those Texas musicians worked here in the Fort Worth area", Mack said. "So we've got the musicians who know what they're doing, and you can't beat this area for live music". 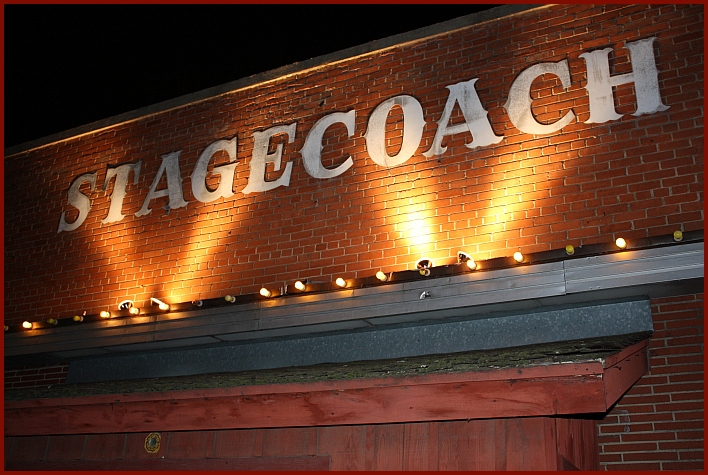 "Nashville radio station WSM and the Grand Ole Opry claimed they were the first (in 1925), but it was actually WBAP and their Cowtown Barn Dance in 1923 that started it all," said Mack. "The historical record will always go back to this area and Fort Worth". 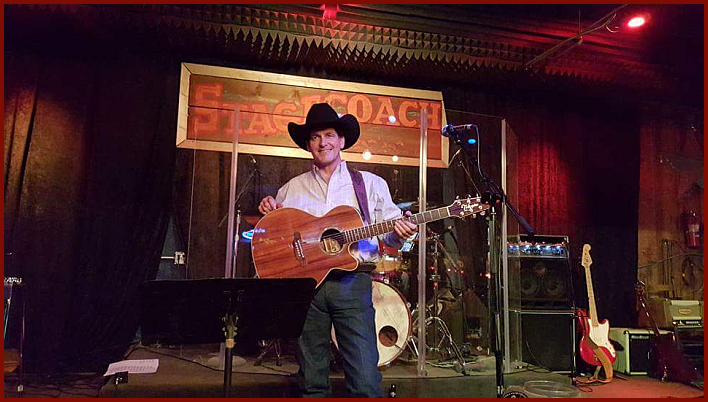 Mack said the "Barn Dance" format, a live radio variety program with in-studio entertainment and an audience, was actually one of Amon Carter's ideas. Carter did more to promote Cowtown than anyone before or since. That inaugural 1923 Cowtown Barn Dance program was the first of a wave of similar and successful shows that brought new breakout artists directly to the fans and established a touring tradition and booking circuit across the country. 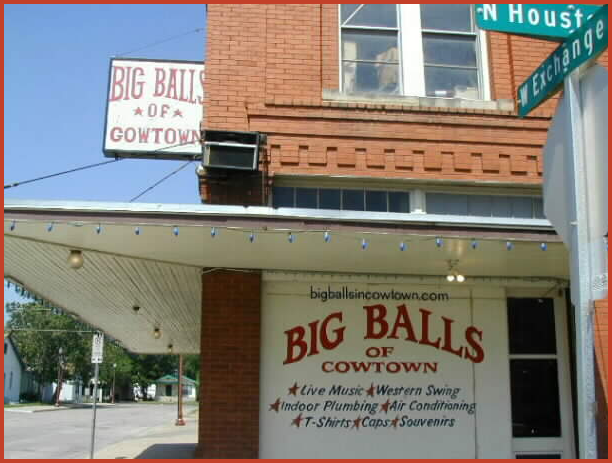 Much later, the Big D Jamboree at Dallas' 6,000-seat Sportatorium was broadcast by KRLD beginning in 1948. It lasted until 1966 and reflected changing tastes in postwar country music.

At one time, the Cowtown Barn Dance show aired four hours every Saturday night, says The Handbook of Texas Online, and was broadcast nationwide by the CBS Radio network on a rotating basis with the Louisiana Hayride from Shreveport and the Grand Ole Opry.

WHEN WESTERN SWING WAS KING

More importantly, Fort Worth is undoubtedly credited as the birthplace of a fusion style of music that is indisputably Texas' own: Western Swing. It is the ultimate dance music, an uptempo melting pot of cowboy, string band, blues and jazz. Born in the formative years of 1929 to 1936, and it still endures today. 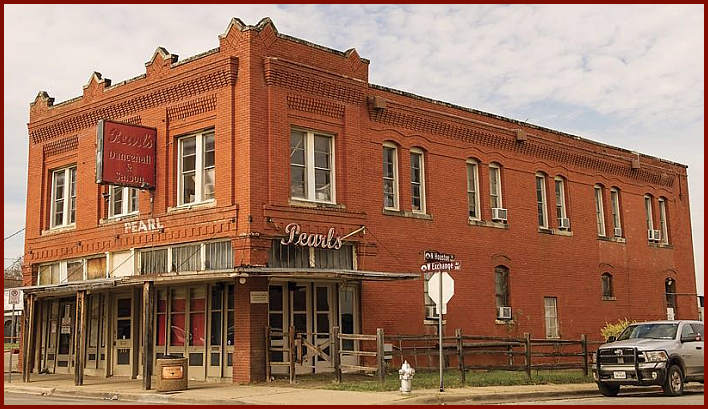 Bob Wills, who grew up playing fiddle with his father and grandfather, moved to Fort Worth in 1929 from his West Texas Panhandle home of Turkey. He ended up in a band with the innovative jazz-blues vocalist Milton Brown, forming the Wills Fiddle Band which became the basis of the Light Crust Doughboys in 1930. The Doughboys were the promotional flour children of W. Lee "Pappy" O'Daniel, the general manager of Fort Worth's Burrus Mill, who would go on to become governor of Texas.

Their daily radio show on KFJZ in Fort Worth made the Doughboys very popular with listeners, but it was not enough for Wills and Brown. Both departed the Doughboys to form their own bands. Wills formed the Texas Playboys and moved to Tulsa, going on to have a spectacular career in Oklahoma, Texas and eventually the entire West Coast. Brown stayed in Fort Worth and formed the innovative model for Western Swing bands to follow - Milton Brown and His Musical Brownies. The band played to huge enthusiastic dancing crowds at Crystal Springs Dance Pavilion on White Settlement Road. Sadly Brown died in 1936 after a car wreck on Jacksboro Highway, just as he was about to launch into stardom with future planned Hollywood Western movies. 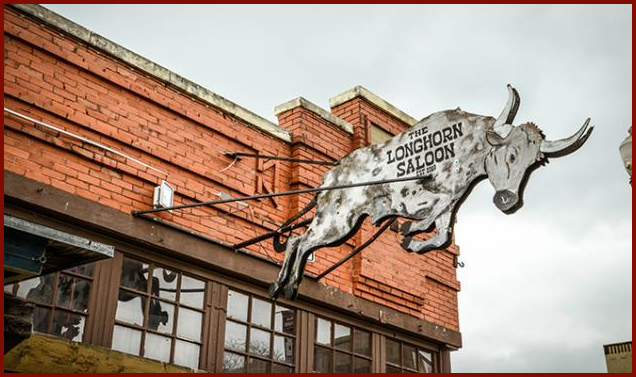 Amazingly after nearly 90 years, the Light Crust Doughboys are still in existence, playing Western Swing and Gospel classics at venues all over the Metroplex.

Though most people think of Wills as the father of Western Swing, Milton Brown was really the first practitioner and, had he lived, might have eclipsed Wills' accomplishments.

While Wills was providing irresistibly upbeat music for families weathering the Great Depression and, later, World War II G.I.s, future country stars were taking note. In his 1988 memoir with Bud Shrake, Willie: An Autobiography, Willie Nelson explained how the Western Swing icon from Turkey, Texas became his own role model for the influential Outlaw Movement to come decades later. "Bob Wills taught me how to be a bandleader and how to be a star," Nelson said. " He would hit the bandstand at 8 p.m. and stay for four hours without a break. One song would end, and he'd count to four and hit another one. "There was no time wasted between songs," Nelson said. "I learned from him to keep the people moving and dancing. The more you keep the music going, the smoother the evening will be". 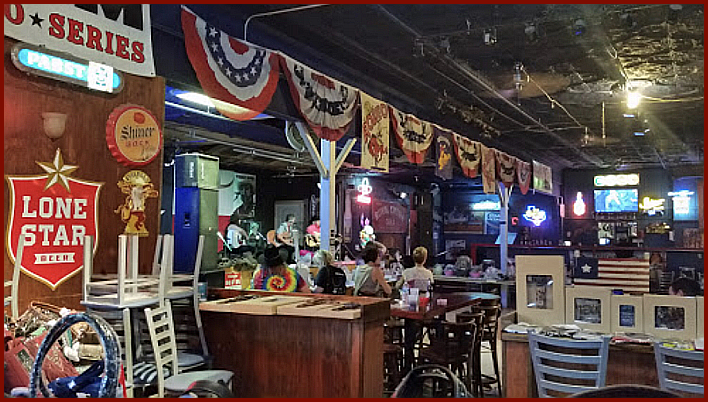 Never one to drag his feet, Wills would cut five radio shows at a time, 15 minutes each, Bill Mack recalled. "I had the honor of being Bob Wills' announcer," Mack said. "I was in Nashville when they put Bob Wills in the Country Music Hall of Fame. 'I don't believe I should be in the Country Music Hall of Fame,' he said to me, 'because I do Western Swing.'"

At one point late in his career, back in Fort Worth, Wills played a date that Mack thought was a bit light as far as audience appreciation. It didn't bother Wills at all. "Bill, my applause is the sound of dancing feet," the bandleader said. Wills died in Fort Worth in 1975, following a stroke two years before. He had remained active in performing and recording up until that time. 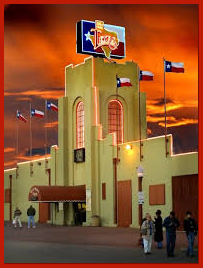 Before Billy Bob's Texas opened in 1981, there was Panther Hall, at 600 S. Collard St. in the Polytechnic High School area, during the 1960s and '70s. And there was the legendary Crystal Springs Dance Hall at 5653 White Settlement Road, accommodating over 800 on the dance floor. Not to mention The Stagecoach Ballroom, opened in 1967 at 2516 Belknap St., its third location since 1961. The old hall is family-operated, and generations of Fort Worth families have navigated its 3,500-square-foot dance floor.

Dallas had the Longhorn Ballroom on Corinth near downtown - originally built for Bob Wills but lovingly owned by Dewey Groom for decades - and the nearby Big D Jamboree.

Over the past 30 years Western Swing has continued to thrive in the historic Fort Worth Stockyards at Honky Tonk saloons such as Big Balls in Cowtown, Pearl's and more recently Lil' Reds Longhorn Saloon, where loyal fans dance the night away to live Western Swing and Texas Traditional Honky Tonk music four nights a week. 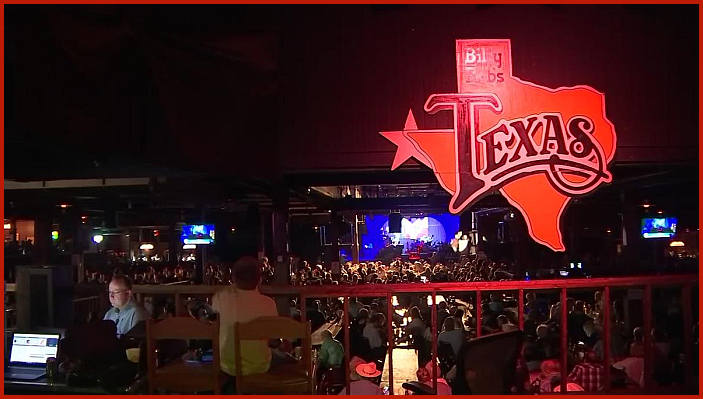 Panther Hall became the place to hear live music, with acts like Loretta Lynn, Buck Owens, George Jones, Ray Price, Porter Wagoner, Johnny Cash and Lefty Frizzell performing for 2,000 people a night in a 32,000-square-foot facility with a distinctive coliseum shape. It was a must-play stop for touring artists of the '60s and '70s. "I don't know of one star that didn't play Panther Hall," Mack said. "When Panther Hall was in action, country music was just becoming a big, big item." Panther Hall eventually closed in 1978, but its exciting legacy continued when the even bigger Billy Bob's Texas opened on the Fort Worth Stockyards in 1981. 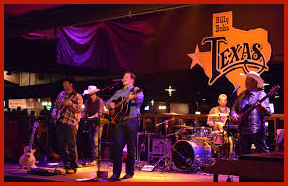 "What Billy Bob's Texas and Panther Hall established is the fact that country music fans would come out in big numbers to hear their touring favorites," Mack said. "After the Grand Ole Opry, I'd say Panther Hall was just as important".

Willie Nelson and Jerry Lee Lewis both recorded live albums there in 1966, and Charley Pride did the same in 1969. "Jerry Lee Lewis had the most appearances and attendance record there," Mack said. "Channel 11 did a remote TV broadcast from there on Saturday nights, the Cowtown Jamboree, with no rehearsals - we just did it all raw and live. We got higher ratings than Flipper for a while there." 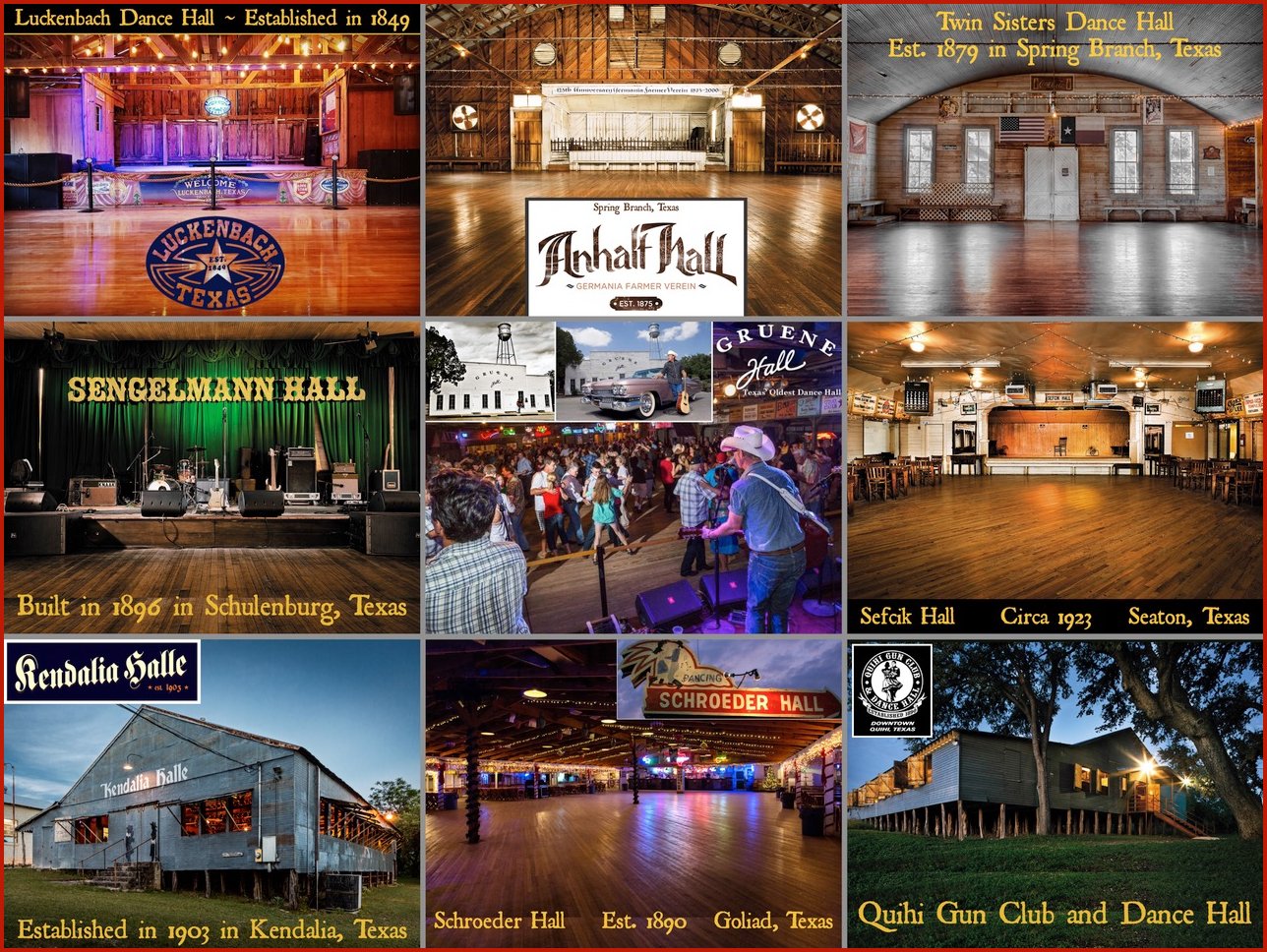 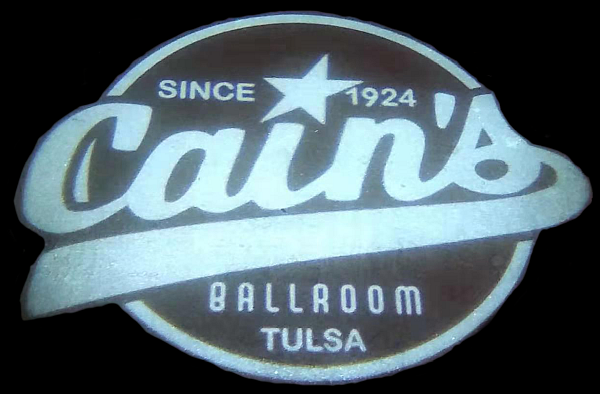 Texas Dance Hall Preservation, Inc., is a 501(c)(3) nonprofit organization dedicated to promoting
the public awareness, preservation, and continuing use of historic dance halls in Texas.

Bill Mack Reflects on Fort Worth

The Cowboy Culture of Fort Worth, Texas