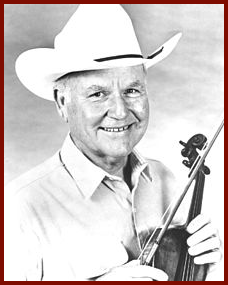 John Paul "Johnny" Gimble (May 30, 1926 - May 9, 2015) and was considered one of the most important fiddlers in the history of Western Swing and Country music genres.

In a 1981 documentary, he said the first music that made an impression on him was when he heard from his uncles playing mandolin and fiddle. He began playing fiddle himself when he was 10 and, by the time he was 12, was performing with his brothers in a band called the Rose City Swingsters. The trio played local radio gigs, but soon after, Gimble moved to Louisiana and began performing with the Jimmie Davis gubernatorial campaign. He returned to Texas after completing his service in the U.S. Army in World War II.

Back in Texas, Gimble continued to hone his fiddling skills with a number of Texas radio and dance bands. In 1948 he made his first recording, playing with Robert Bro's Rhythmairs in Corpus Christi.

Although it occupied only 11 years of his career - 1949-1959 - Gimble acknowledged his greatest thrill, a role in which he would always be known for, was being a touring member of Bob Wills & his Texas Playboys Western Swing band, in which he played fiddle and electric mandolin. He distinguished himself by mastering the difficult five-string fiddle (most fiddles have only four strings). He would later be inducted into the Rock and Roll Hall of Fame (under the category of Early Influence) in 1999 as a member of Bob Wills' legendary Texas Playboys band. 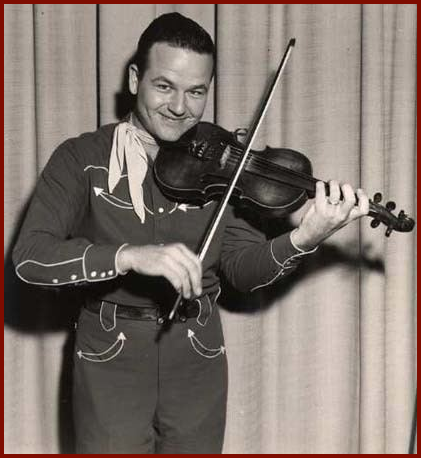 "I didn't really get crazy about Bob Wills until 1940," he said. He would subsequently label Wills as "the most charismatic" stage performer he'd ever seen. When one of Wills band members asked Gimble if he would like to join the fabled group, he remembered, "It was like asking if I wanted to go to Heaven."

His fiddling style was influenced by Texas fiddlers like Wills who played the "breakdown" fiddle tunes. Gimble's fiddling style, while uniquely his own, came to be known as the "Texas fiddling style" that emerged during the first half of the twentieth century among such legendary Texas jazz fiddlers Jesse Ashlock, Cliff Bruner and Louis Tierney. Gimble learned from them, and further developed his style while playing with Wills, who epitomized and promoted a new sound known as Western Swing. Western Swing rose to national prominence in the 1940s, combining the old-time, Southern-derived Anglo string band tradition, with its breakdowns, schottisches, waltzes, and reels, with the big band jazz and pop music of the day.

After Gimble married Barbara Kemp of Gatesville, Texas in 1949, he settled in Dallas, where, in the early 1950s, he began doing radio and television shows with Bill and Jim Boyd (Bill Boyd & his Lone Star Cowboys) and performed on The Big D Jamboree, a weekly variety show broadcast live from the Dallas Sportatorium. He broke off to form his own group in 1951, performing as the house band at Wills's clubs in Fort Worth and Tulsa, but rejoined in 1953 and continued to play with Wills until the early 1960s. He played fiddle on Marty Robbins' #1 hit "I'll Go on Alone". 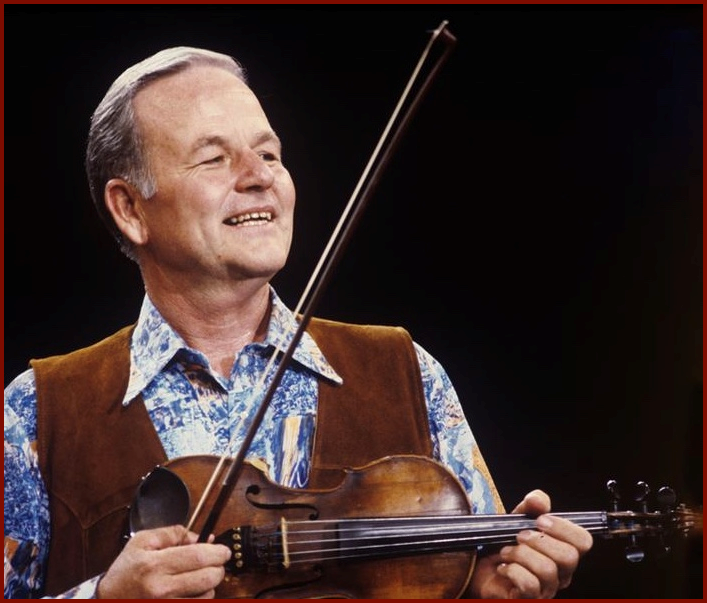 In 1955 Gimble, moved to Waco, Texas, and split time between running a barber shop at the regional VA Hospital and music. In 1960 he quit touring with Bob Wills and hosted one of the first locally produced television shows on KWTX, Johnny Gimble & the Homefolks. Gimble's show featured a young bass player from nearby Abbott, Texas named Willie Nelson, and a lifetime friendship and partnership was born.

In 1968, after repeated encouragement from his peers, Johnny moved his family to Nashville, Tennessee. From then on, his steady work as a session musician included sessions with Merle Haggard and The Strangers on their Bob Wills tribute album (A Tribute to the Best Damn Fiddle Player in the World (or, My Salute to Bob Wills)), Conway Twitty, Connie Smith, Loretta Lynn, Lefty Frizzell, Ray Price, Willie Nelson, and Chet Atkins on Superpickers in 1973. The following year he took a cue from a song ("Fiddlin' Around") which he had written and performed on the Atkins' Superpickers album, and recorded the first of ten solo albums titled Fiddlin' Around. He also became a fiddling star on the popular nationally televised Hee Haw Country music variety-comedy show. Although admitting the money was better in Nashville, homesickness eventually drove Gimble back to his old stomping grounds, a region he commemorated in the cleverly crafted "Under The X in Texas. 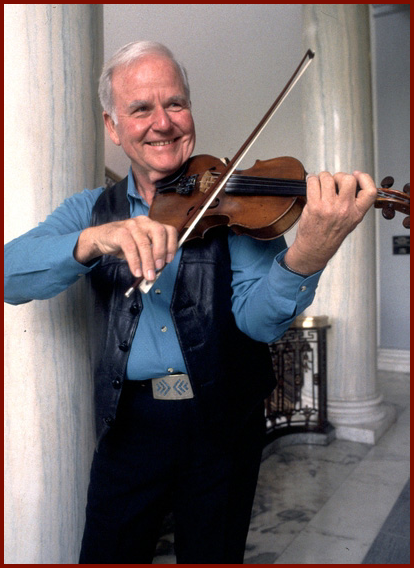 Appropriately, Merle Haggard featured Gimble's instrumental wizardry on his 1970 album, A Tribute to the Best Damn Fiddle Player in the World (Or, My Salute to Bob Wills). And Wills handpicked Gimble to play on his final Emmy Award winning 1973 album For The Last Time - Bob Wills & his Texas Playboys.

As luck (and his endless skills) would have it, Gimble actually got to play the part of the King of Western Swing - Bob Wills in Clint Eastwood's 1982 film, Honkytonk Man. The movie also yielded Gimble two chart singles, "One Fiddle, Two Fiddle" and "San Antonio Rose," both of which he shared with Ray Price. He also played and acted in Willie Nelson's 1980 movie, Honeysuckle Rose and was a member of Nelson's touring band from 1979 to 1981.

Between 1975 and 1990, he won five musician of the year awards from the Country Music Association and nine from the Academy of Country Music. And later, recording with Ray Benson and his band, Asleep at the Wheel, Gimble earned two Grammys for best country instrumental performance - one in 1993, the other in 1995. 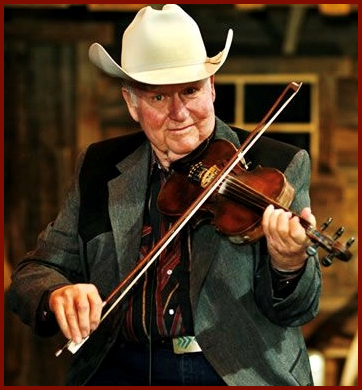 Gimble's career spanned into the 21st century, recording with Vince Gill, Tanya Tucker, and performing at the 49th Annual Grammy Awards with Carrie Underwood in 2007. "Until Lloyd Maines surpassed him, Johnny held the record for most appearances on Austin City Limits. He played with heart and soul and had an infectious spirit and sense of adventure - both in his music and personality," said ACL Executive Producer Terry Lickona. Johnny was also a regular on Minnesota Public Radio's A Prairie Home Companion hosted by Garrison Keillor, who in 1994 penned "Owed to Johnny Gimble" as a tribute to his friend after Gimble received the NEA's National Heritage Fellowship.

Gimble released his final album, Celebrating With Friends, in 2010. Among those friends participating in the project were Nelson, Haggard, Gill and Keillor. In his appraisal of Celebrating With Friends for Allmusic.com, critic Jeff Tamarkin wrote that, in spite of all the accompanying luminaries, "the star of the album is undeniably Johnny Gimble ... [who] despite being an octogenarian at the time of the album's release, has retained a youthful spring in his playing and his vocals as well. Regardless of who else appears on a given track ... when Gimble's bow touches the strings, that track comes to life." 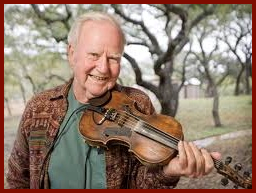 Perhaps Gimble's greatest fan was his young nephew, the prodigy student fiddler and mandolin player Jason Roberts, who has recently taken the bandleader mantle of Bob Wills' Texas Playboys. Roberts now owns Johnny Gimble's prized fiddle, and gets emotional talking about "the man, the music, the legend of Johnny Gimble."

Johnny was of the most revered and awarded fiddlers in the history of Western Swing and Country music. He passed away on May 9, 2015 at his country home in Dripping Springs, Texas, at the age of 88. He had suffered a series of strokes during his final years. He was posthumously inducted into the Country Music Hall of Fame in 2018.