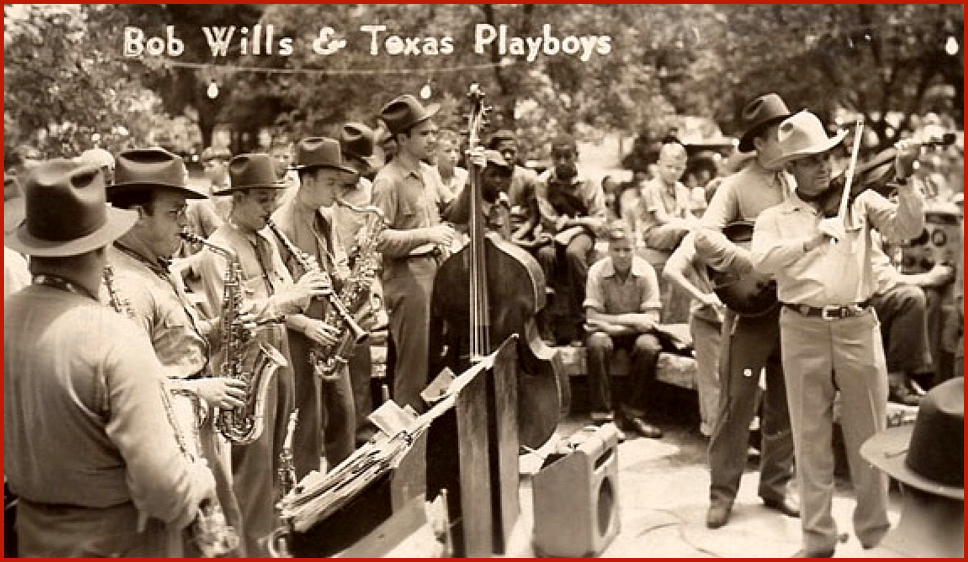 The history of Western Swing Music and it's birthplace at Fort Worth's Crystal Springs Dance Pavilion began in early 1929 with the formation of the Wills Fiddle Band (a small trio house dance band consisting of Bob Wills on fiddle, Milton Brown on lead vocal and Herman Arnspiger on guitar). Later that year, the band added 2 more musicians (Milton's little brother Derwood on lead guitar and Sleepy Johnson on bass fiddle) and became the Aladdin Laddies. In 1930 they became the Light Crust Doughboys, sponsored by the Burris Mill and Elevator Company to promote Light Crust Flour.

The Doughboys began performing on local Fort Worth radio stations KFJZ and WBAP. The band's articulate announcer, Truett Kimzey, helped them promote Light Crust Flour and sellout huge crowds of dancing patrons at Crystal Springs beginning in May of 1930. Milton Brown then took the lead in 1932 when he and his little brother Derwood broke away from Bob and the Doughboys to form the first true Western Swing band - Milton Brown and his Musical Brownies, featuring harmony twin fiddles, jazz piano, and the innovative addition of Bob Dunn and his revolutionary amplified steel guitar. The Brownies became the headliner weekend band at Crystal Springs and set the benchmark by which all other Texas Swing bands followed, up until Milton's tragic death in April of 1936. Historians agree that Milton's innovations earned him the title of the Father Of Western Swing.

Bob and his nucleus of talented musicians left the Light Crust Doughboys in 1933 and moved to Waco, Texas to form Bob Wills and the Playboys, and then eventually to Tulsa in 1934, renaming the band as Bob Wills and his Texas Playboys. Bob with the help of his two brothers along with a growing list of talented band members became the King of Western Swing, writing such major hit songs as New San Antonio Rose, Maiden's Prayer and Faded Love. Bob broadcasted his immensely popular dance music across the Southwest from Tulsa's powerful 50,000 watt KVOO radio station, and eventually took their innovative cowboy jazz music to Hollywood... and the rest is history.

In spite of Bob's huge success in spreading Western Swing from the West Coast to Nashville, he returned to his Fort Worth roots to perform one last glorious show at Crystal Springs in January of 1961. And just 5 years later, Crystal Springs burned to the ground in a huge 3 alarm fire and was never rebuilt.

Crystal Springs was where Milton Brown experimented and honed his hybrid fusion of toe-tapping swing jazz, blues, mariachi and hillbilly music. It was in those formative years of 1932 to 1936 where he established his legacy to become the "Father of Western Swing". He sadly died as a result of injuries sustained in a car accident on Jacksboro Highway in April 1936 after the car he was driving hit a telephone pole. Many believe that Brown suffered from narcolepsy and had fallen asleep at the wheel of his vehicle. A 16 year old girl who slipped away from her house without her parents' knowledge to go to Crystal Springs with friends was killed in the crash. Brown had agreed to give the girl a ride home that night. Brown was taken to Harris Methodist hospital where his injuries were initially believed to not be life threatening. However, one of his broken ribs had punctured a lung and pneumonia set-in and he died just 5 days later. The site of the crash was in the southbound lane of Jacksboro Highway directly across the street from the Fort Worth Avalon Motel which is still there. After the crash, the headlights from Brown's car beamed directly into the motel's office window. Here is a view of the hotel from the approximate location of Milton's crash. 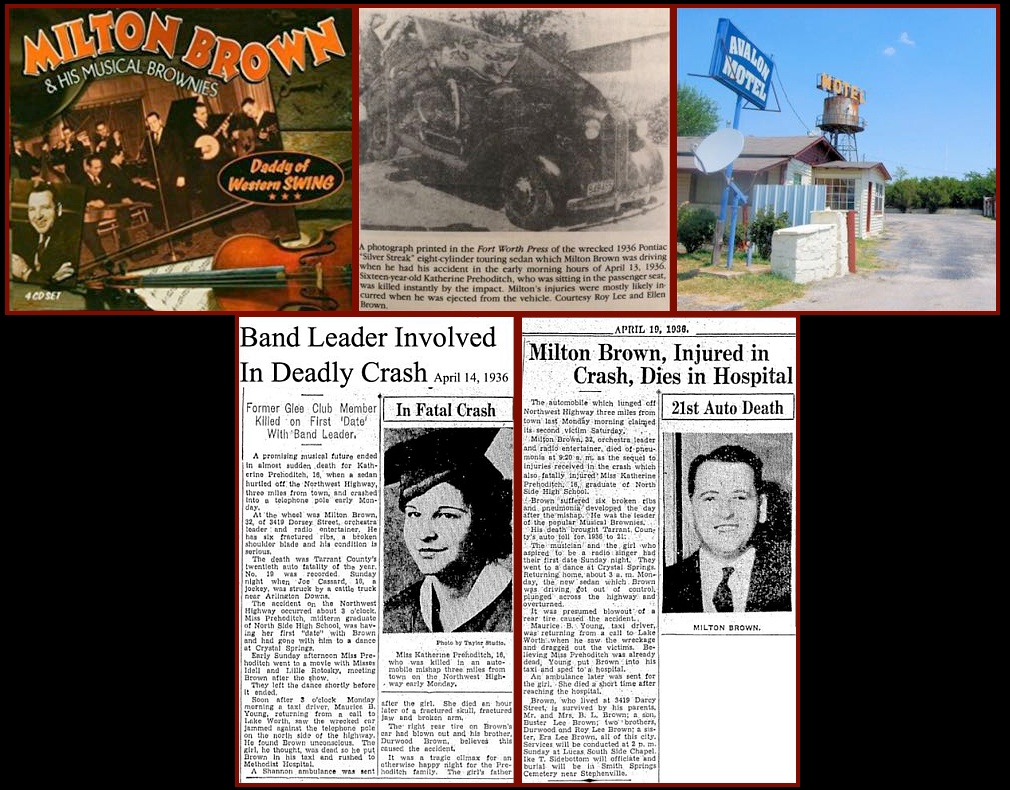 The Texas Playboys Are On The Air!