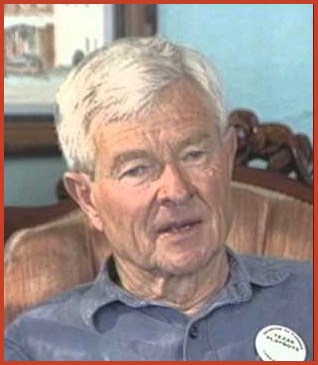 "For a guy who started out like I did, America was the land of opportunity. I've come from a West Texas shoeshine boy to Grammy Award winner and author," says Dr. Charles Townsend. Born November 5, 1929, the Texas native attributes rodeo as the gateway to his life, and an abundant one at that. He announced rodeos 50 consecutive years and took his oratory skills to the college classroom as a history professor, while also writing "San Antonio Rose: The Life and Music of Bob Wills", published in 1976.

It began simply enough. Charles Buddy Townsend - named after musician Charles Buddy Rogers - had drawn a bull, Little Blue, at the rodeo in Ringold, Texas. It was Labor Day of 1946, and Bud's older brother refused to let the 16 year old get on the bull. When the announcer didn't appear, Bud, known for his rodeo announcing imitations, took up the microphone instead. "I took to that like a duck to water. I had a lot of fun, maybe more so than later because I wasn't taking it seriously," says Bud. "In those days, they brought an invalid in an old Sedan to the arena with his sound equipment inside. Sometimes the horses would hit the car or the calves would run behind it. We didn't have electricity at the arena, so we ran a crystal microphone off the car. I would fold a handkerchief over it so it wouldn't melt in the sun. Mine never did." 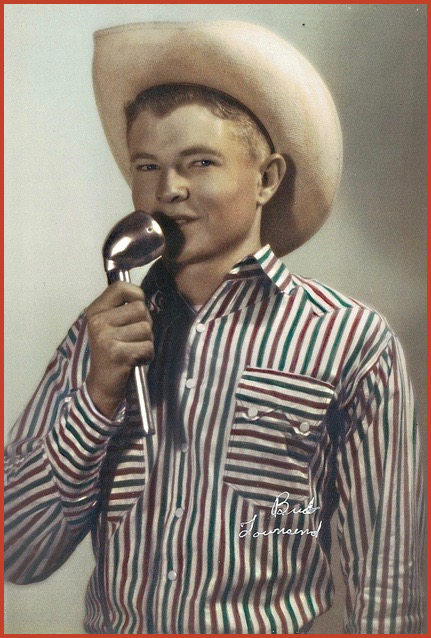 Following his announcing debut, Bud got on one or two more bulls before leaving the chutes behind. "Announcing was my forte, and it gave me something to live for. My mother was widowed with seven children, and we were poor, which was nothing new in the Depression. I never dreamed I'd make ten dollars a day or that there would be any future - I had no reason to believe I'd ever be anything. I had a gang of friends around town, and we were into all kinds of mischief. Announcing opened a door in my life, and in a sense, I owe a debt to rodeo that I can never repay."

Prior to living in the town of Nocona, Texas, Bud and his mother and siblings lived on his grandfather's ranch, eight miles from town on the Chisholm Trail, and just four miles from where H.J. Justin started Justin Boots Company. "I lived in an era right between the frontier and modern America. We went to town with the team and wagon and brought groceries back. One of my granddad's ranches was on the Red River, and he was rich when oil was three dollars a barrel. My Uncle Joe Hancock raised the great Hancock horses." When Bud was in his early teens, his mother moved to Nocona and rented an old hotel for the family. "Main street was my front yard and the alley was my backyard. I was truly an alley rat. But when I started announcing, I became something of a businessman, and I had to give up my wild and wicked ways, because people won't buy ads from a shady character," he recalls with a laugh. 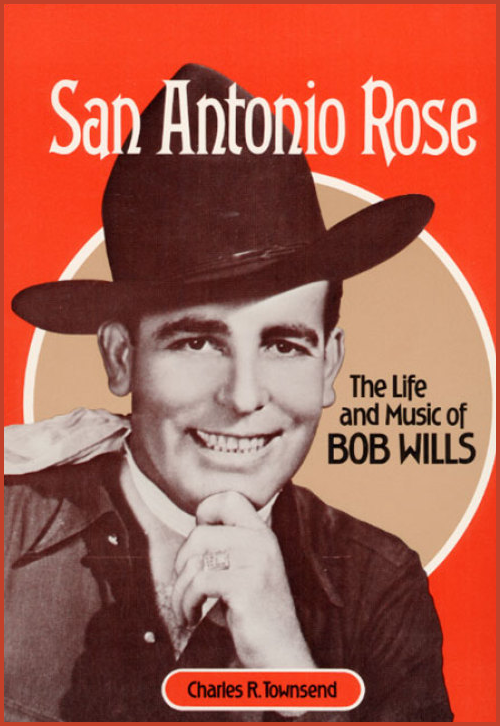 He announced horse races, baseball games, and sold ads, a long way from his ten cents a shoe shine. He returned to boots, however, in his late teens when Ruth Salmon (Roach) the lady bronc and trick rider, secured him the sales manager position at Olsen-Stelzer Boot and Saddlery Company in Henrietta, Texas. "She was a dear friend of my mother's, and we lived on the ranch two and a half miles from Ruth and Dick Salmon. We were very close, and I also knew Tad Lucas because she'd stay on Ruth's ranch. They never referred to rodeo as a sport - they looked on it as show business. To me, that was the greatest era of rodeo, when it was more of a show."

Show business agreed with Bud, and he learned his craft announcing rodeos in towns such as Muenster and Gainesville, Texas. The 17 year old turned his attention to the RCA, and when Ruth put in good word to Bobby Estes, a rodeo producer, Bud was all but in with the association. "I announced for Bobby in Hamilton, near Stephenville, Texas, and he liked me. When I joined the RCA, their office was in Fort Worth in the Burnett Building. Earl Lindsey was the manager and they had a little 6 by 6 foot office with maybe one file cabinet and a desk. I asked Mr. Lindsey, 'If I join the RCA, can I announce amateur?' He said I'd be put on the blacklist, and I had to decide right then if I wanted to be amateur or pro. My original card number is 1249 - I was the 1,249th member in 1948."

Two years later, Bud married Mary Smith, who was a book keeper for Olsen-Stelzer. Their first son, William, was born in 1951, and twins Mary Jane and Charles Jr. came several years later. Bud announced for Bobby Estes another five years, and the family always came along. "We wore out about three trailers - we couldn't make any money if we stayed in hotels or ate out. Our first trailer was 17 feet and it wasn't even self-contained." Bud explains his biggest break in the rodeo business came when he quit working for Bobby Estes. "It freed me up to announce bigger rodeos - after I quit with him, I travelled all over. I went to the RCA convention and booked shows, from state fairs in California and North Carolina to rodeos in Mercedes, Texas, and Omak, Washington." He also worked for rodeo producers including Homer Todd, Beutler Brothers, Cotton Rosser, Everett Colburn, and Walt Alsbaugh for 30 years. 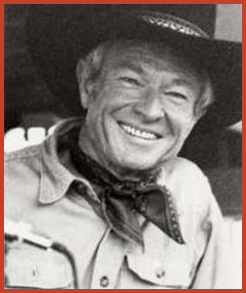 "In the meantime, I became a Christian. My wife and her family are so Baptist, they go back to John the Baptist, and I decided I wanted become a preacher." Bud continued to announce in the summers and work for Olsen-Stelzer and Nocona Boot Company while attending school. He graduated from Decatur Baptist College and went on to Midwestern State University in Wichita Falls, Texas. "The faculty got me a fellowship for Baylor University where I went for a year until I applied to University of Wisconsin. I'd gotten interested in history at Wichita Falls, and University of Wisconsin had a top history department, but I knew I wasn't ready for the big league yet. I took a teaching job at Texas Tech University to really learn basic American history, and then went to Wisconsin for three years to get my PhD."

He would go on to teach history at West Texas A&M University in Canyon for 27 years, where he is presently Professor Emeritus, while Mary taught first grade in Canyon for 24 years. Bud was one of the best lecturers the school had seen. "I attribute that to announcing rodeos," he says. "I couldn't announce a rodeo and use big words and be intellectual - you have to speak the people's language. I lectured the same way in the classroom, and they could understand me." 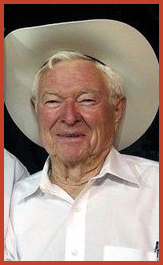 Bud also taught at Hardin Simmons, Texas Tech, and University of Wisconsin. While teaching at Texas Tech, he made extra money by interviewing rodeo people for Sylvan Dunn, an associate professor of Sociology. Bud made sure his interviews took him to Turkey, Texas, home of the King of Western Swing, Bob Wills. "When I was growing up on my granddad's ranch, my dad was a big fan of Jimmy Rogers, whom he'd played guitar with. They both had TB, and Dad met Jimmy in a sanitarium in San Angelo. In full health, Dad worked in the oil fields, and he was a tinkerer. When I was five or six, he built a wind charger to charge the car battery so we could listen to the radio. We listened to three things - Bing Crosby, Franklin D. Roosevelt's speeches, and one noontime, we found Bob Wills. In the Depression, there wasn't much to live for with war coming. But Bob Wills' music was uplifting. Dad told me one time, 'Stay with this Bob Wills, he'll be big one of these days.' And I never forgot it."

Bud's chance to meet his childhood idol came when he met Johnny Lee Wills, Bob's brother, who produced a rodeo in Tulsa, Oklahoma. "He got me in to meet Bob Wills, and when I came back to the history department, they thought I was lying about meeting him. But my wife fell in love with his wife, and we became close friends." Bud was asked to write an article on Bob Wills for the Dictionary of American Biography, but he felt a book was in order. For the music lover who signed up for clarinet in college and carried the reeds in his pocket, the 85 interviews with Bob Wills that followed were exhilarating. "It was about ten years in the making. I did all my writing in the morning. I knew I was writing to the world, and I'd sit there and get a high just working on it!" A scholarly work edited by Judith McCullough, "San Antonio Rose: The Life and Music of Bob Wills" was published in 1976 by University of Illinois Press in a series of books on music and American life.

The book was a masterpiece, meticulously recapturing the musical excitement created by Bob Wills. Townsend traced Wills' colorful and dynamic life, from his birth into a family of frontier fiddlers in 1905, to his death in Fort Worth, Texas in 1975. He shows how Wills was the first to fuse black and white musical traditions into an exciting new dance genre, and examines the tremendous impact he had on both popular and Nashville country music and even rock & roll through the more than 550 recordings Wills made during the forty years he and his legendary Texas Playboys performed in countless dancehalls and radio stations across the country. 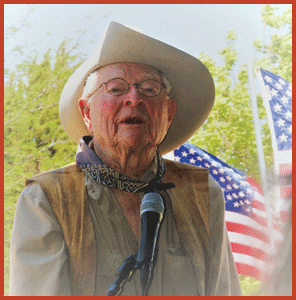 In 1975, Bud accepted the Grammy Award for his album notes on "For the Last Time", Bob Wills' final album with The Texas Playboys. Bud was one out of 4,000 entrants and five nominees for the Grammy Awards. "One reason I think I won the award was because I interviewed so many musicians and asked about their influences. Bob's was Bessie Smith, Empress of the Blues from the 1920s and the wise-cracking vocals of black-face minstrel singer Emmitt Miller."

Today, Bud and Mary continue to make their home in Canyon, Texas. Their son William is an optometrist, and Mary Jane is a medical advisor for one of largest blood distributing banks in the world, located in Scottsdale, Arizona, second only to the Red Cross. Their younger son, Charles Jr., passed away five years ago. "Regardless of what I've done, I've stayed with rodeo in the summers, and it was like paid vacation for 50 years," says Bud, who's been inducted into the Texas Rodeo Cowboy Hall of Fame, and received the Lifetime Achievement and All-Around Cowboy awards through the American Cowboy Culture Awards in Lubbock, Texas, which he announces. His childhood hometown of Nocona even held a Bud Townsend Day in his honor. "I wouldn't take anything in the world for those 50 years of announcing," Bud finishes. "Rodeo introduced me to so many cultures and foods and people, and it freed me from poverty and gave me ambition. Everything I've done goes back to that, and I'm so proud I did it."

Each year on the last Saturday of April, Dr. Charles Townsend returns to the childhood home of Bob Wills in Turkey, Texas to celebrate Bob Wills Day. Thousands of loyal Bob Wills fans eagerly anticipate Dr. Townsend's historical presentation announced from the main stage, alongside the famed Texas Playboys, as they perform the great old songs of the King of Western Swing.