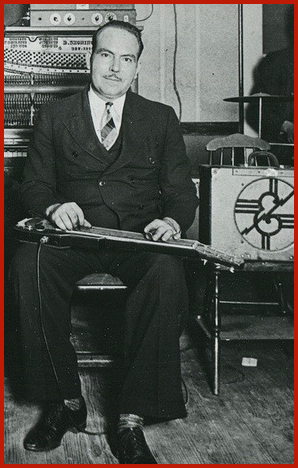 As good as Milton Brown's Musical Brownies already were in their first 3 years of existence, the Brownies made a quantum leap when Milton hired Bob Dunn late in 1934. Born in Oklahoma in 1908, Dunn was proficient on jazz trombone as well as steel guitar. He had reportedly copied his homemade amplification rig from a Rube Goldberg-like electric guitar contraption that was played by an unnamed black street performer that Dunn had met by chance on New York's Coney Island. Dunn first encountered the man playing for tips on the Coney Island boardwalk, later following him all the way to New Orleans in order to complete his "studies." The amplified guitar was an idea whose time had come; within a year of Dunn's recording debut, jazz guitarist Eddie Durham (who also doubled on trombone) and others were hauling their own jerry-rigged amps into the recording studios. But Dunn's first, marathon sessions with the Brownies on January 27th and 28th, 1935, unequivocally mark the first appearance of an amplified guitar on a commercial recording. They also constitute the recording debut of one of the most singularly imaginative and off-the-wall instrumental stylists in the annals of American popular music.

The style of Dunn's single-string leads and solos was influenced almost entirely by jazz hornmen, especially Wichita Falls, Texas trombonist Jack Teagarden who toured and recorded with legendary Godfather of Jazz Louis Armstrong. When Dunn hit his solos, you don't hear the sweet and dulcet whining tones of the familiar pedal steel (which had not yet been invented). You hear a lurching, perpetually off-balance-sounding cascade of bent broken tones, raw trombonelike swoops and smears, advanced harmonic substitutions that occasionally make Dunn sound like a proto-bebopper, abrupt squeals of feedback, bell-like harmonics, and above all, a sense of delighted discovery and bemusement, as if the unlikely sounds coming out of Dunn's amp were startling him as much as his listeners. The guitarist only occasionally played the sort of chordal passages that were to become de rigueur in pedal-steel soloing. When he did improvise chordally, he would voice riff-like lines in two or three-part harmony, in emulation of a swing band's sax or brass section. 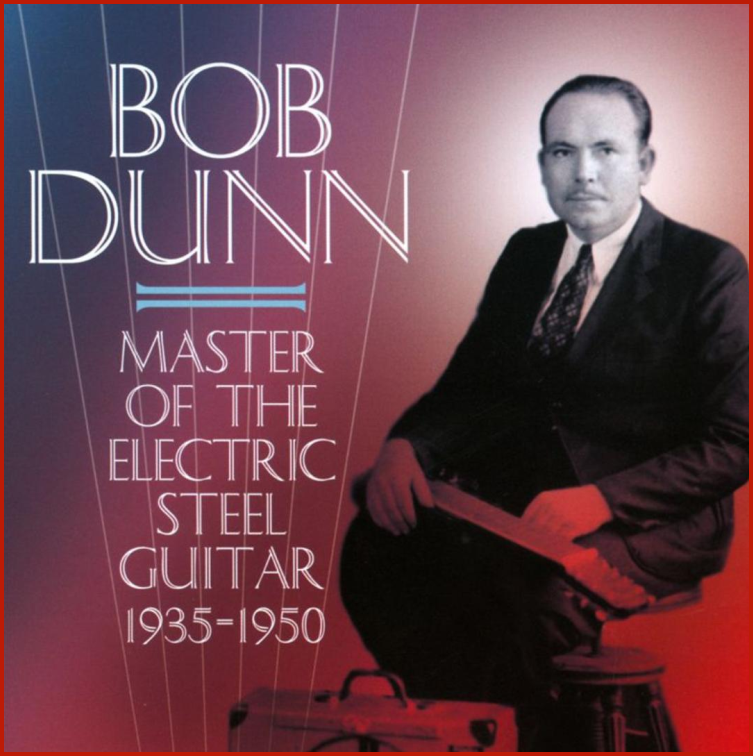 Brownies arrangements also exploited the amplified steel guitar's varied tonal colorings; on "The Waltz You Saved For Me," a sentimental trifle transformed by the band into something swinging, the melody is stated in three-part harmony - twin fiddles handling the top and middle notes with Dunn's guitar on the bottom. Still, it's the improvised solos that carry the day - the future-sonic pre-bop of "Somebody's Been Using That Thing," the almost Thelonious Monkish use of jabbing, offcenter accents on "If You Can't Get Five Take Two," the feedback-laced outburst that improbably sends the Dixieland chestnut "Darktown Strutters' Ball" spinning off into the stratosphere. Of the 84 records the Brownies made with Dunn on board, he played solos on 61. All of them were included in the Brownies five CD box. After Milton's death, Dunn made a few subsequent recordings with various western swing groups, including his own shortlived recording unit, Bob Dunn's Vagabonds. By the end of the forties, Dunn had more or less dropped out of music, though he did run a music store in Houston before his death in 1971. His consistently bracing and often jawdropping solos and accompaniments on the Brownies sides remain his most lasting legacy.

The Brownies recordings makes it possible to appreciate and savor Bob Dunn's work in its proper context. Now that we can add him to the short list of pioneering electric guitarists that also includes Les Paul and Dunn's fellow southwesterners Eddie Durham, T-Bone Walker, and Charlie Christian, we can better appreciate the pan-idiomatic, fundamentally American origins of the electric guitar - the most revolutionary innovation in music and technology in the last half of the twentieth century. Except for Dunn, the guitarists we've mentioned eventually became identified with one particular idiom or genre - Christian and Durham with jazz, Walker with blues, Paul with pop. During the earlier part of their careers, however, the lines between genres were not so clearly demarcated. To a greater or lesser degree, all these players, Dunn included, were musical omnivores. Each of them was familiar to some degree with pop, blues, jazz, and country music; in Dunn's case, the Brownies' wide-ranging repertoire also exposed him to old-fashioned hoe-down tunes, western cowboy ballads, and Tex-Mex Mariachi influences. In time, all of it became raw early material for rock and roll... and the rest is history!