Cowtown - The Birthplace of Western Swing 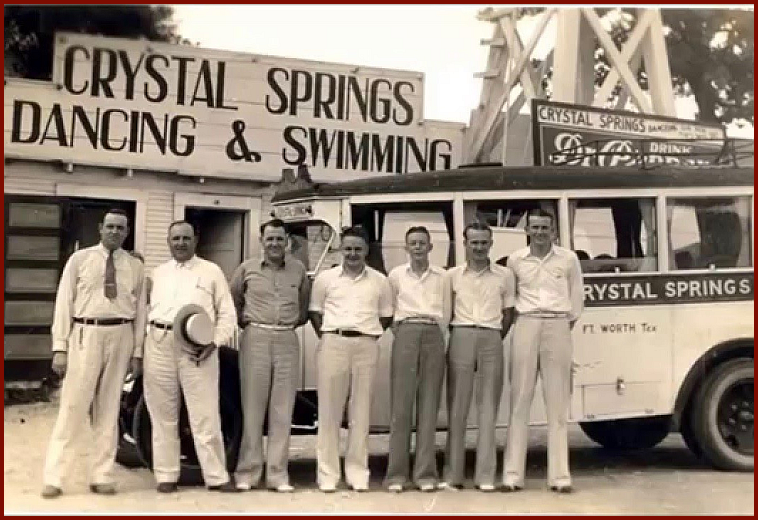 Western Swing music is considered a hybrid subgenre of American Jazz, Delta Blues and Frontier Fiddle music that originated nearly a century ago in Fort Worth, Texas. It was developed between the years of 1929 to 1936 at primarily the Crystal Springs Dance Pavilion on White Settlement Road just west of downtown Fort Worth. Thanks largely to the combined efforts of early pioneers Milton Brown and Bob Wills, along with their accompaniment of talented string band members, Western Swing was born out of a desire to create dance music with an up-tempo beat, that attracted huge crowds to Crystal Springs and soon spreading to many other dance halls throughout Texas, Oklahoma, Louisiana and eventually California during the 1930s and 1940s, until a federal war-time dancehall tax in 1945 contributed to the genre's decline.

The highly contagious music was an outgrowth of Jazz, combined with an amalgamation of Frontier Fiddle, Bohemian Polka, American Folk, Dixieland Jazz, Delta Blues, Mexican Mariachi and Cajun Waltz -- wrapped in a homegrown Texas Swing dance beat; and played by a hot string band augmented with twin fiddles, mandolins, guitars, drums, brass horns & clarinets, piano and, most notably, the amplified steel guitar, which gave the music it's most distinctive sound. 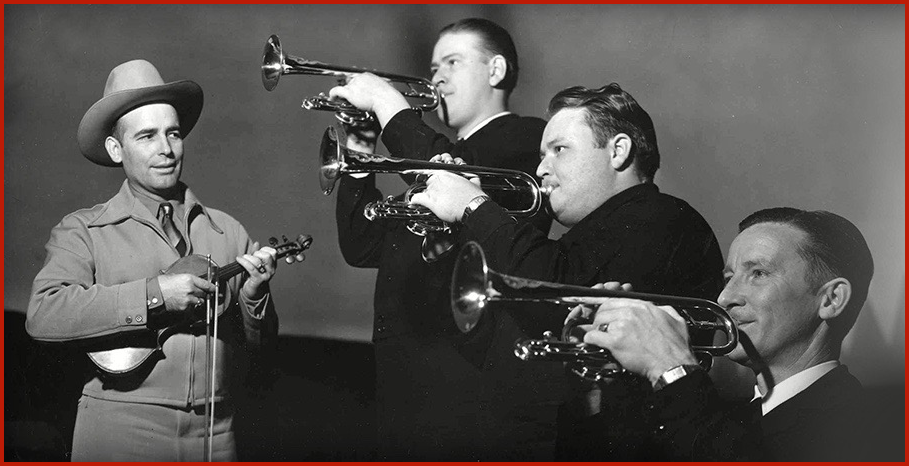 Western Swing differs in several ways from the music played by the nationally popular horn-driven big swing bands of the same era. Western Swing bands, even fully orchestrated with many different types of instruments and harmonizing vocals, always followed the fiddle's lead. Additionally, although popular horn bands tended to arrange and score their music, the early Western Swing bands created by Milton Brown and Bob Wills improvised freely, either by soloists or collectively.

According to Merle Travis, "Western swing is nothing more than a group of talented country boys, unschooled in music, but playing the music they feel, beating a solid two-four rhythm to the harmonies that buzz around their brains. When it escapes in all its musical glory, my friend, you have Western swing." 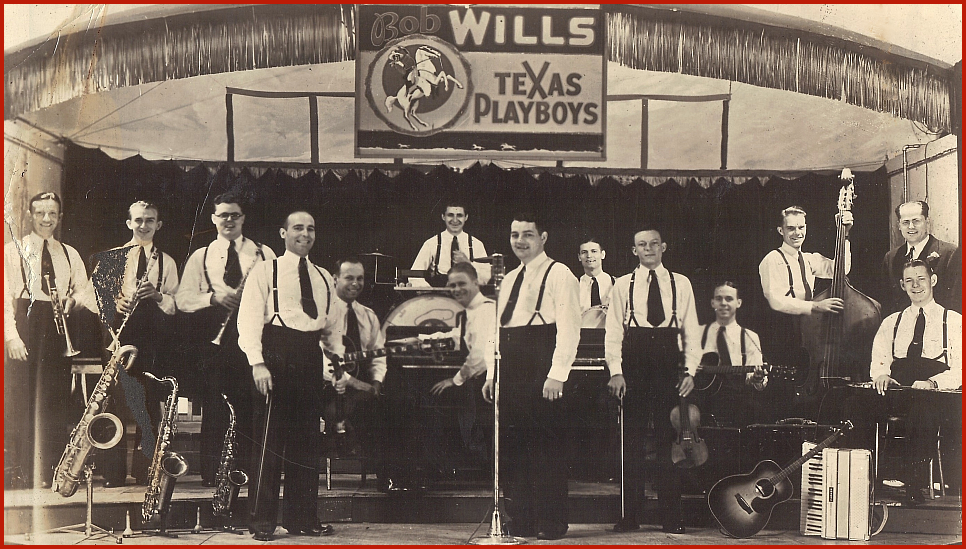 Western Swing in its beginnings was just dance music. The term swing, meaning big band dance music, wasn't used until after the 1932 hit "It Don't Mean a Thing If It Ain't Got That Swing". Recording companies came up with several names before World War II trying to market it: hillbilly, old-time music, novelty hot dance, hot string band, and even Texas Swing. Most of the big Western dance bandleaders simply referred to themselves as Western bands and their music as Western dance music, with many like Bob Wills, adamantly refusing the hillbilly label.

Bob Wills and others believed the term Western Swing was used for his music while he and his band were based in Texas and Oklahoma in the 1930s and 1940s. In April of 1942, the Los Angeles-area Wilmington Press carried ads for an unidentified "Western Swing Orchestra" at a local nightspot. That winter, influential LA-area jazz and swing disc jockey Al Jarvis held a radio contest for top popular band leaders. The winner would be named "the King of Swing". When Spade Cooley unexpectedly received the most votes, besting Benny Goodman and Tommy Dorsey, Jarvis declared Cooley to be the King of Western Swing. However, all fans of the hallowed genre vehemently consider Milton Brown to be the Father of Western Swing, and Bob Wills to be the true King of Western Swing. 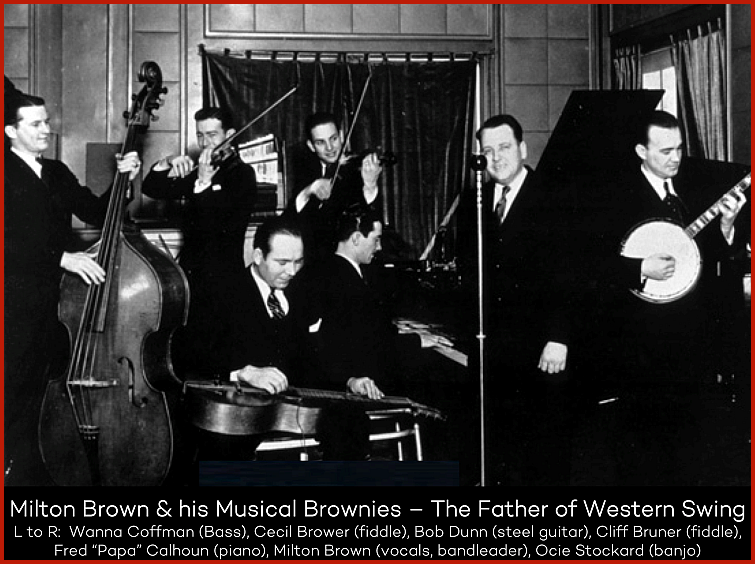 The roots of Western Swing began in 1929 at the Crystal Springs Dance Hall in Fort Worth, Texas and grew to small towns throughout the lower Great Plains throughout the 1930s, growing from Fort Worth house parties and West Texas ranch dances where fiddlers and guitarists played for dancers. During its early development, scores of groups from Fort Worth to San Antonio to Shreveport to Oklahoma City played many different popular songs of the time with the same up-tempo two-four rhythm beat. Prince Albert's East Texas Ramblers out of Terrell, Texas, the East Texas Serenaders from Tyler, Texas and the Louisiana Five in Lindale, Texas, all added jazz elements to traditional music in the later half of the 1920s through the early 1930s. Fred "Papa" Calhoun, who played hot-jazz piano for Milton Brown's Musical Brownies, recalled that, "Around 1931, we played in a band in Decatur, Texas that covered a lot of jazz stuff like the Louisiana Five was playing back in those days. We also learned a lot from Louis Armstrong, Red Nichols, Jack Teagarden Charlie Christian, Joe Venuti and Bix Beiderbecke." 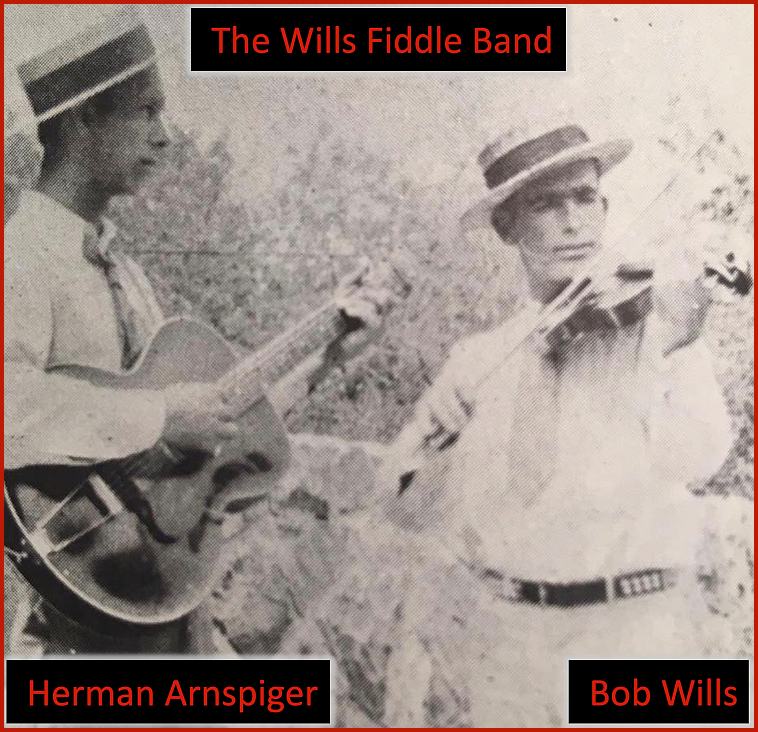 In 1929 Bob Wills and Herman Arnspiger formed the Wills Fiddle Band and soon thereafter met Milton Brown at a local Fort Worth house dance and invited him as the jazz/blues vocalist to create the trio band - the Aladdin Laddies. One year later, together with Milton's younger brother Derwood and banjoist Clifton "Sleepy" Johnson, they formed the Light Crust Doughboys, the first professional hot string band of this beloved genre. The group first played at Crystal Springs Dance Pavilion and many other Texas and Oklahoma dance halls, and were heard throughout the Southwest on powerful radio broadcasts from Fort Worth's KFJZ and WBAP with exciting introductions made by their band announcer, Truett Kimzey. Photographs of the Light Crust Doughboys taken as early as 1930 show three different guitarists: Herman Arnspiger, Sleepy Johnson and Milton's little brother Derwood Brown, along with Texas state champion fiddler Bob Wills and versatile blues/jazz lead vocalist Milton Brown. 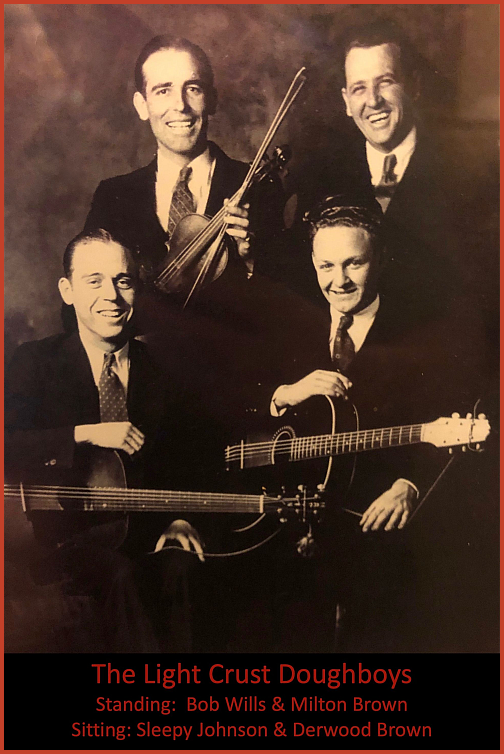 On February 9, 1931, Brown, his brother Derwood, Bob Wills, and C.G. "Sleepy" Johnson were recorded by Victor Records at the Jefferson Hotel in Dallas, Texas under the name The Fort Worth Doughboys. Derwood Brown played guitar and Johnson played tenor guitar. Both "Sunbonnet Sue" and "Nancy Jane" were recorded that day. The record was released by Victor (23653), Blue Bird (5257), Montgomery Ward (4416 & 4757), and (Canadian) Sunrise (3340). Historians consider these two songs to be the very first recorded Western Swing music. 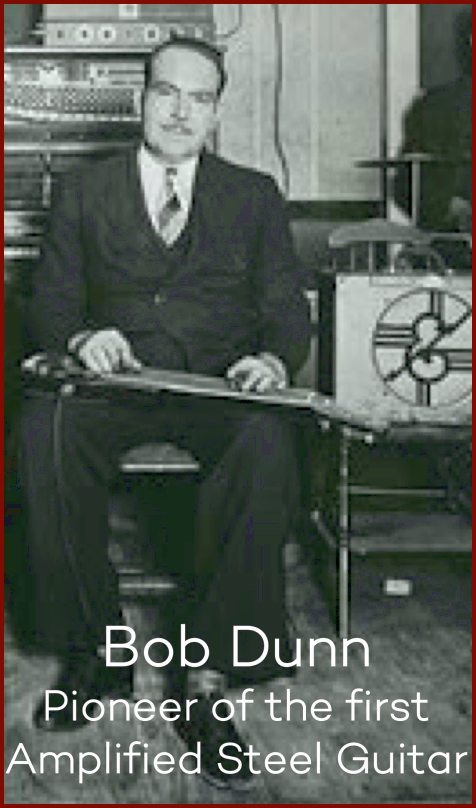 The amplified stringed instruments, especially the steel guitar, gave the music its distinctive sound. It all began in 1934 when Bob Dunn electrified a Martin O-series acoustic guitar while playing with Milton Brown's Brownies. According to Milton Brown, "The idea came to Dunn when he was working at Coney Island in New York... he ran into this black guy who was playing a steel guitar, kinda like a Hawaiian guitar, with a homemade pickup attached to it... he hooked up to this old radio amp or something and was playing blues licks with this loud electric sound... and he got this guy to show him how he did it. I never knew this black musician's name, but Bob Dunn talked to me about him often." 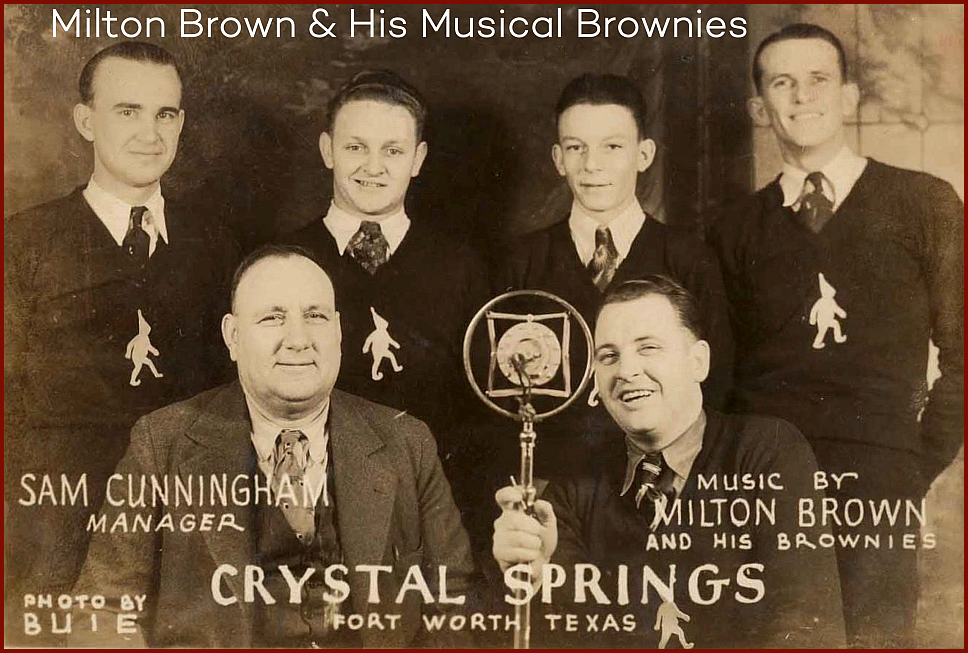 In 1935, Brown and His Musical Brownies recorded W.C. Handy's "St. Louis Blues" (Decca 5070) using a shortened arrangement of what they played at dances at the famed Crystal Springs Dance Hall on the West side of Fort Worth, Texas. In the dance hall arrangement, the band would play at a slow-drag tempo for as long as 15 minutes with an accompanying vocal. The tempo would then increase to a resounding presto for the final choruses. The crowds of close to two thousand dancers loved the arrangement and literally went crazy waiting for the anticipated change in tempo. Waltzes and ballads were interspersed among faster songs if the dancers, who would dance two-step or round dances, became tired after faster numbers. 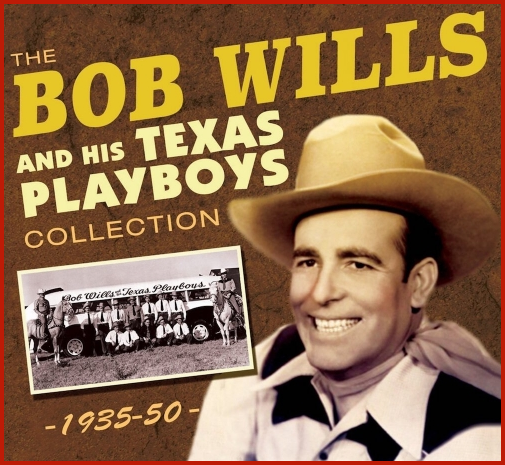 The 1938 session rosters for Wills' Texas Playboys recordings show the addition of legendary steel guitarist Leon McAuliffe, who took Bob Dunn's hot-steel guitar to a stratospheric level. The "front line" of Wills' orchestra consisted of twin fiddles and twin guitars, along with the wonderful addition of brass horns and reed instruments that Bob would joyfully encourage with his memorable "Aw-Haaa" hollers when he felt so moved to encourage their improvisational magic. Bob's innovations helped the style gain a much wider following through the music of his much expanded Texas Playboys in Tulsa and later to Hollywood. It was backed by his inspirational roots in Turkey & Fort Worth when he pioneered the Wills Fiddle Band, the Light Crust Doughboys and his valuable collaboration with good pal Milton and the Musical Brownies.

Wills recalled the early days of Western swing music in a 1949 interview. "Here's the way I figure it," he said. "Me and Milton sure wasn't tryin' to take credit for swingin' it. We just took popular songs done by Jimmie Davis, the Skillet Lickers, Jimmie Rodgers, Bessie Smith and other songs I had learned from my father, grandfather and others" - Wills said, "We'd pull these tunes down an set 'em in a hot dance category... and we wouldn't let 'em be a runaway... we'd just lay a real beat behind 'em an' the people would began to dance and really like it. It was nobody intended to start anything in the world. We was just tryin' to find enough tunes to keep 'em dancin' and not have to repeat so much." 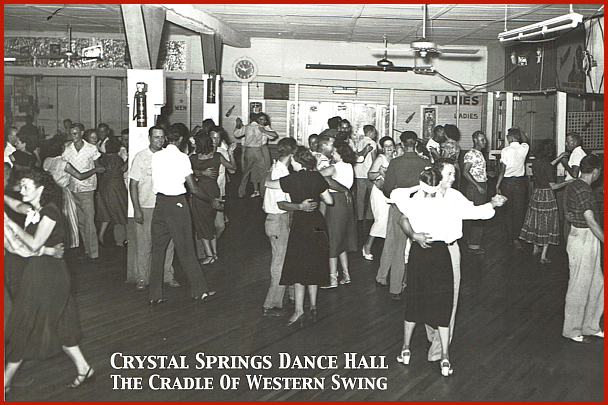 In the mid-1930s, Fort Worth, Texas became a hub for Western Swing. The Crystal Springs Dance Pavilion was at the center, and it prospered as a Western Swing and Country music venue until the 1960s. An estimated 2,000 people attended a New Year's Eve Dance there in 1961 to see Bob Wills and his Texas Playboys perform a grand reunion at the coveted birthplace of Western Swing.

Western swing influenced genres known as honky-tonk, rockabilly, and early rock and roll, popularizing the following instruments in country music and totally changing the Nashville country sound: use of electrically amplified steel and lead guitars, use of drums to reinforce a strong backbeat, expanded instrumentation, a honky tonk heavy backbeat superimposed onto a polka or waltz beat with improvisational jazz/blues solos. 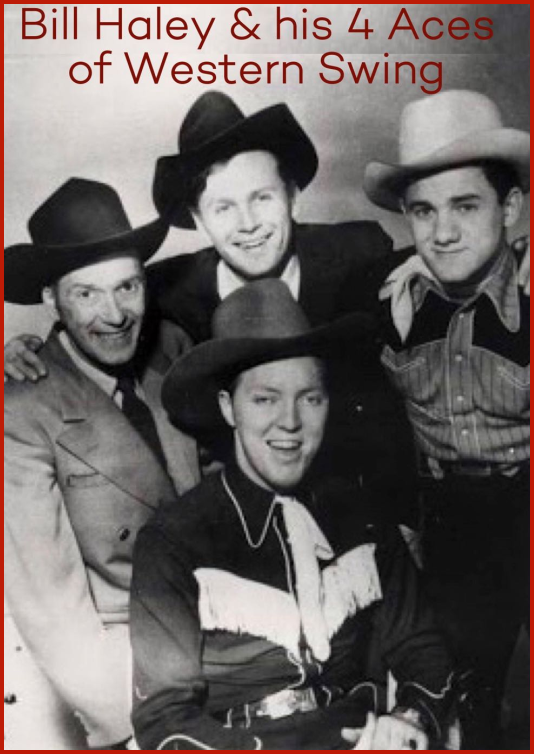 Western swing was one of the many sub-genres to influence rockabilly and rock and roll. Bill Haley's music from the late 1940s and early 1950s is distinctly classified as Western Swing, and his band from 1948 to 1950 was named Bill Haley and the Four Aces of Western Swing.

The outlaw country movement led by Willie Nelson, Waylon Jennings, Alvin Crow and the Pleasant Valley Boys and Asleep at the Wheel helped make Austin, Texas a major center of Western Swing beginning in the 1970s. The annual South by Southwest music festival and the Austin City Limits PBS television series have contributed to this success. Merle Haggard and the Strangers were also key players in this revitalization. Western Swing Monthly, based in Austin, is a newsletter for musicians and fans.

In Clint Eastwood's 1982 movie Honkytonk Man, his character meets Bob Wills (played by Johnny Gimble, an original Texas Playboy), who is recording in a rural Texas studio with other former band members.

In 2011 the Texas Legislature adopted a resolution designating western swing as the official "State Music of Texas". Western swing lives on today in Turkey, Texas during the last weekend in April for Bob Wills Day Festivities, a 4 day immersion into Texas Playboy history where you can tour the Bob Wills Museum, attend multiple concerts featuring the greatest Western Swing bands. Join us on November 11-13, 2021 to celebrate the 90th Anniversary of the birth of this beloved dance music at our inaugural "Cowtown Birthplace of Western Swing Festival" in Fort Worth's Historic National Hall.

The Stockyards: National Day of the American Cowboy