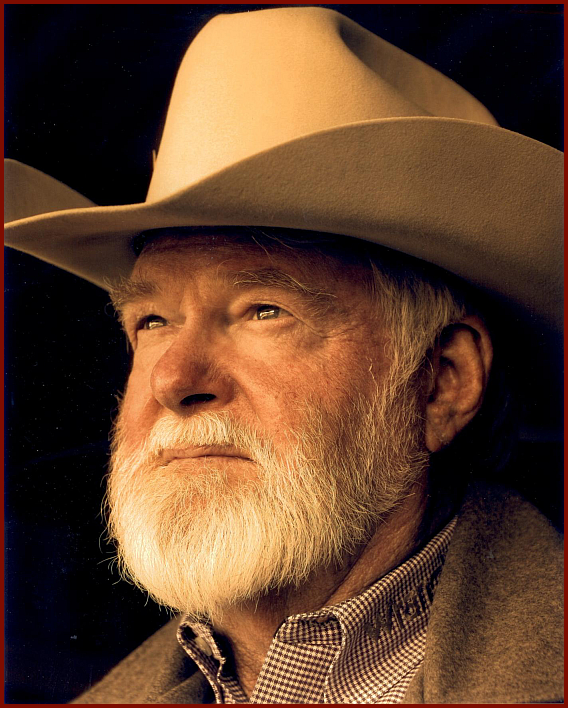 Russell "Red" Steagall (born December 22, 1938) is a successful actor, musician, Cowboy poet, and stage performer who focuses on Western Swing, Cowboy and Traditional Country music genres. He has performed for heads of state, including a special party for President Reagan at the White House in 1983, and has completed three overseas tours for the United States Information Agency to the Middle East, the Far East and South America.

Steagall was born Russell Steagall in Gainesville, Texas on December 22, 1938. He called his childhood in the Texas Panhandle "idyllic". But those years were not so good for the Steagall Family. His mother was pregnant when his father left the family in August 1954. The next month, while riding bulls at Texas area rodeos, Steagall, then 15, was stricken with polio.

Just four months later - January 1955 - the Salk vaccine stopped that disease, but it was too late for Steagall. The deltoid muscle in his left shoulder was wrecked, ending his rodeo career. 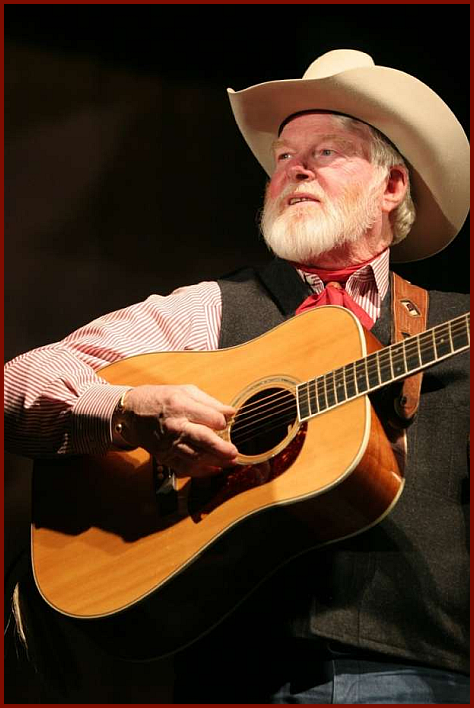 Maybe without polio, Steagall would have become the ranch vet he'd dreamed of being, but as it was, his mother gave him a $10 secondhand mandolin and music lessons, a gift that changed everything. Several times a week, Steagall rode his bike to the music teacher's house and worked on strengthening each finger in turn. His hand grew strong, the music took root, but the shoulder would not recover.

"I've done everything I wanted to do in spite of polio," he says. "I have no regrets in life. Everything that has happened to me that was unpleasant at the time, has been a blessing."

After college, he had a short career in agricultural chemistry, and then one fine day, an old pal who was making it big in the music business called and said he needed help. Without a backward look, Steagall headed to California, hunkered down in Hollywood and soon became a music industry executive.

Along life's way, he became a singer and a songwriter, an actor, a rodeo announcer, a television personality with an award-winning show and host of his own radio show. 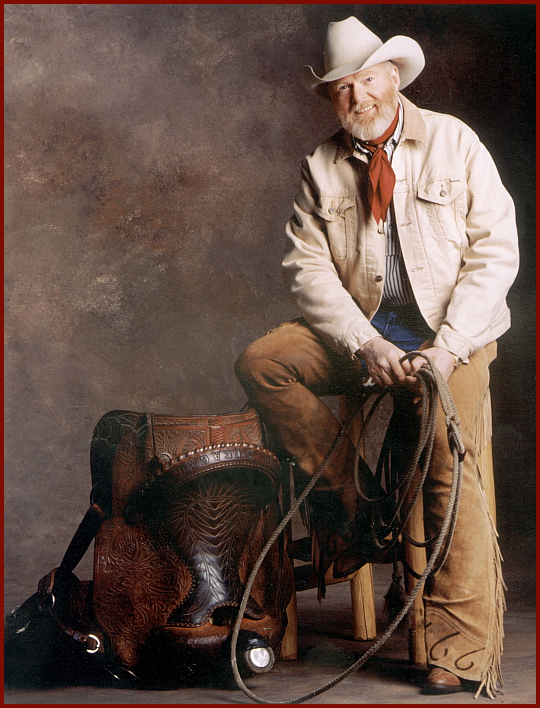 He took up the guitar and the mandolin as physical therapy to recover the strength and dexterity of his arms and hands. Steagall entered a career in agricultural chemistry after graduating from West Texas State University with a degree in animal science and agronomy. He then spent eight years as a music industry executive in Hollywood, and has spent the last 50 years as a recording artist, songwriter and television and motion picture personality. He currently maintains offices outside of Fort Worth, where he is involved in the production of motion pictures and television shoSteagall has made numerous appearances on syndicated television shows. He currently hosts a one-hour radio show, Cowboy Corner, on 150 stations in 34 states. Cowboy Corner celebrates the lifestyle of the American West through the poems, songs and stories of the American Cowboy. In 2010, In the Bunkhouse with Red Steagall began airing on the RFD-TV network; as of 2017, Steagall now hosts Red Steagall is Somewhere West of Wall Street for the same channel.

Steagall's down-home, friendly manner and considerable musical talents made him a favorite of rural America with his numerous appearances on television's Hee Haw and Nashville on the Road. He also spent four years as host of the nationally televised National Finals Rodeo, was host of the Winston Pro Tour on ESPN for the 1985 season, and co-hosted the College National Finals Rodeo for the Freedom Sports Network from 1988 through 1991. He was also the host of Western Theater on America One Television. 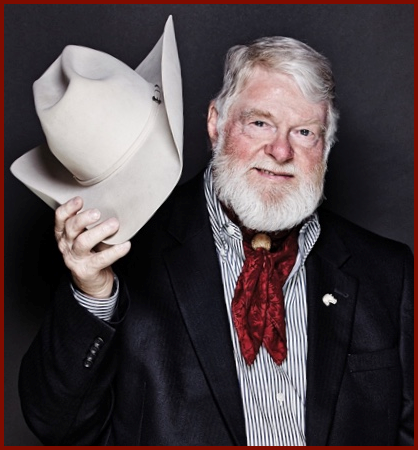 Steagall is a trustee of the Pro Rodeo Hall of Champions, honorary member of the Cowboy Artists Of America, and former board chairman of the Academy of Country Music.

In 1975, he discovered a then-unknown Reba McEntire and signed her to Mercury Records the following year. He discovered her while she was performing the National Anthem the National Rodeo Finals competition in Oklahoma City Oklahoma. One year later, in October 1977, McEntire released her first album on Mercury Records, and though most of her Mercury albums were commercial failures, in 1984, she picked up with her big album, My Kind Of Country. 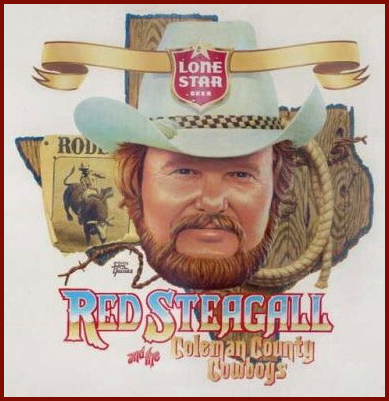 In September 2003, Texas Tech University Press published Born to This Land, a joint effort between Red Steagall and Pulitzer-Prize-winning photographer Skeeter Hagler. The book contains Hagler's black-and-white studies of modern ranching, accompanied by Steagall's award-winning poetry. The Academy of Western Artists named Born to This Land as recipient of the Will Rogers Award for best book of 2003.

Red Steagall's music has been the winner of 8 Wrangler Awards from the National Cowboy and Western Heritage Museum in Oklahoma City. The first time, for Best Original Music honoring his l993 Warner Western album, BORN TO THIS LAND. In l995 he received the Best Original Music Wrangler for his Warner Western album, FAITH AND VALUES. In 1997 for Best Original Music, his Warner Western album, DEAR MAMA, I'M A COWBOY was recognized. His 4th project with Warner Western, LOVE OF THE WEST, won the Wrangler for Best Traditional Music for 1999. In the fall of 2002, Red released his 20th album, a Western Jubilee Recording, entitled WAGON TRACKS. This multi-generational journey from the shores of Ireland across frontier America, as told in story and song, received the Wrangler for Best Traditional Music. In April of 2006, Red was presented with another Wrangler award for best original music for his song, HOW GREEN WAS THE GRAZIN' BACK THEN from his release, THE WIND, THE WIRE AND THE RAIL, from Wildcatter Records. In 2008, DAWSON LEGATE, from his Wildcatter Record HERE WE GO AGAIN won a Wrangler Award - Red's 7th. In 2009, A COWBOY'S SPECIAL CHRISTMAS from his Christmas CD COW CAMP CHRISTMAS won an 8th Wrangler Award for Red Steagall. 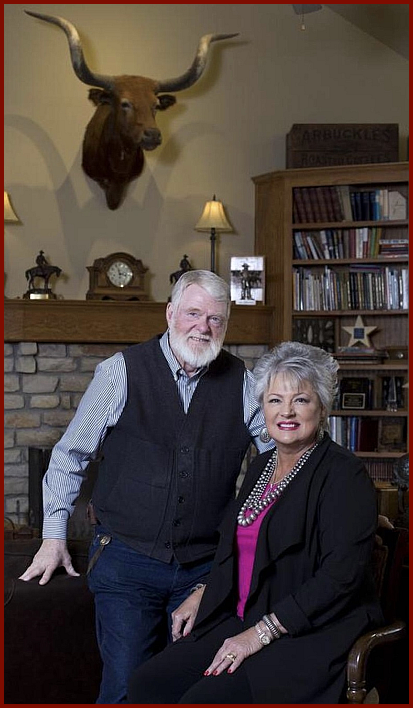 In 1991 the Texas Legislature named Red Steagall the Official Cowboy Poet of Texas. Steagall was an early participant in the American Cowboy Culture Association, which holds the annual National Cowboy Symposium and Celebration each September in Lubbock, Texas. He is also the official Cowboy Poet Laureate Of San Juan Capistrano, California.

In 1999, Steagall was inducted into the Texas Trail of Fame. In April 2003, he was inducted into the Hall of Great Westerners at the National Cowboy and Western Heritage Museum in Oklahoma City, joining the likes of Will Rogers, Theodore Roosevelt, Charles Goodnight, Samuel Loving and Charlie Russell.

In 2004, he received the Spirit of Texas Award and was inducted into the Texas Cowboy Hall of Fame in Fort Worth. In 2005, he was inducted to the Texas Rodeo Cowboy Hall Of Fame in Belton, Texas, and was named "2006 Poet Laureate of the State of Texas" at the Capital in Austin in the spring of 2005. Steagall is the first "cowboy" poet to be named the poet laureate of Texas.

Red and his wife Gail wed in 1977 and have been married 41 years, but they have known each other much longer. She had married Steagall's cousin, but he tragically died in a car crash just six weeks after the wedding. "She was still part of our family," says Steagall. They kept in touch. Years passed, and Gail remarried, then divorced. Steagall married, too, and adopted his wife's children, but the marriage was soon finished. In time, it became clear that he and Gail were meant to be together, and they married in 1979.

Since 1991, Red has hosted the hugely successful Red Steagall Cowboy Gathering in the Stockyards National Historic District of Fort Worth. The annual 3 day event features a ranch rodeo, chuckwagon cookoff, children's poetry contest, a big Western Swing dance, cowboy music and poetry and a trappings show, among other western activities.

I Was Born to be a Cowboy

Enjoy the Sights and Sounds of Red Steagall's Cowboy Gathering