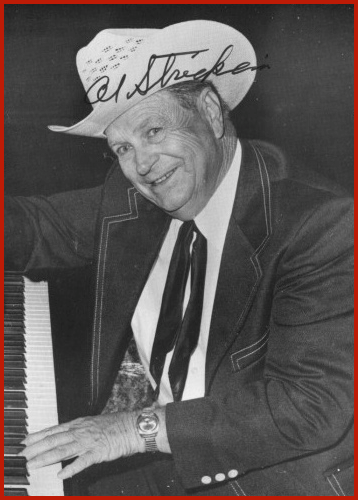 Al Stricklin was a jazz pianist whose lively playing helped give Bob Wills & his Texas Playboys the band's unique Western Swing flavor. Ironically, when Stricklin first heard Wills play the fiddle during a 1930 audition at a Fort Worth radio station where Stricklin was in charge of hiring, he thought Wills' minstrel black face routine was more of a comedy act than any serious musical offering. It wasn't long before Stricklin's opinion changed and he became a key part of the Texas Playboys' lineup, staying with the band during its most productive years from 1935 through 1942. He played piano as "Brother Al" on several hundred of the group's recordings, including Wills' huge national hit in 1940, "New San Antonio Rose". 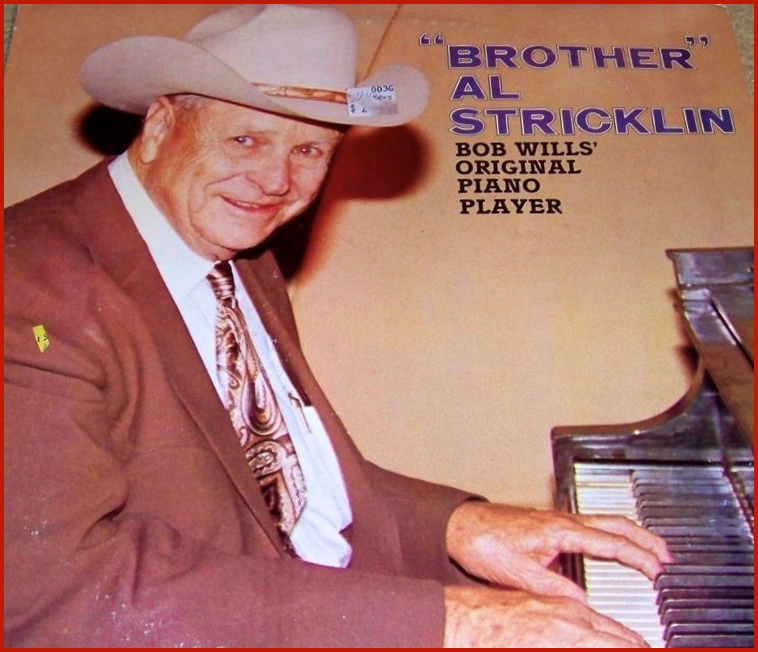 The "piano pounder", as Wills also called him, was born Alton Meeks Stricklin in 1908 in Antioch, Texas. He never had the benefit of music lessons, and always said that his major inspiration was the improvisational jazz great Earl "Fatha" Hines. When he was about four or five years old, Stricklin started teaching himself how to play piano with his father, who was a fiddler. By the time he left Grandview High School and headed to Weatherford Junior College in 1927, and later Baylor University, the self-taught pianist was teaching others how to play to help pay for his schooling. While at Weatherford Junior College, he performed with two bands, a jazz group named The Texans and a Dixieland band called the Rio Grande Serenaders. Stricklin, a history major, was almost ejected from the strict religious rules of Baylor because of his involvement with a jazz group. When the administration of the Baptist university got wind of his association with a group called the Unholy Three, and learned that he played in the trio at local dances, only a dean's intervention kept him from being expelled.

Stricklin ended up leaving school anyway, thanks to the lean years of the Depression. To help support his family, he took work in 1930 at Fort Worth's KFJZ radio station, where he later auditioned Wills. Before joining the Texas Playboys, Stricklin was also employed as an elementary school teacher and principal in Island Grove, Texas, and he later played with the Hi Flyers dance band in Fort Worth. When Wills heard him play at a club called the Cinderella Roof in 1935, he lured Stricklin to the Texas Playboys with a job that paid $30 a week. 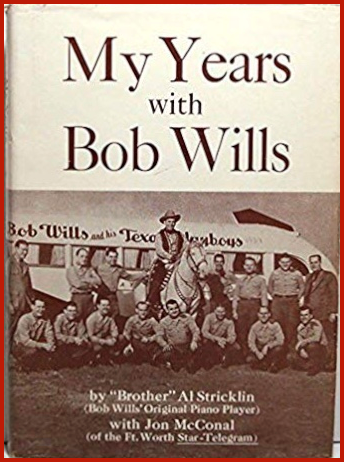 Stricklin left the Texas Playboys to work at North American Aircraft during World War II. In 1943 he turned down a chance to reunite with the Texas Playboys in California, instead marrying and settling down in Fort Worth. He put his musical career behind him until 1973 when United Artists asked for a final recording from Wills and his legendary band. The double album recording, Bob Wills & his Texas Playboys - For The Last Time, remarkably featured most of the 1930s Original Texas Playboys and came to be viewed as an historic event. It is considered today to be the greatest Western Swing album ever recorded, winning a Grammy Award and attracting a whole new generation of listeners to the Dance Hall Heaven of Western Swing.

After the first day of that infamous recording, Bob Wills suffered a major stroke in Fort Worth and fell comatose until his death in 1975. Stricklin and some of the other original band members continued for 13 more years to record and perform under the name Bob Wills' Original Texas Playboys. Stricklin also had a brief solo career. 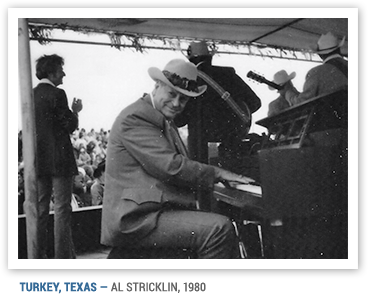 He wrote My Years With Bob Wills, a memoir, in 1976. Stricklin, along with Wills and the Texas Playboys, is an inductee to the Country Music Hall of Fame and the Rock & Roll Hall Of Fame.

"Brother" Al Stricklin gave his final performance in a career that spanned 50 years on April 12, 1986 at the Fort Worth Stockyards' White Elephant Saloon. He passed away just six months later at age 78 in a convalescence home in Cleburne, Texas.